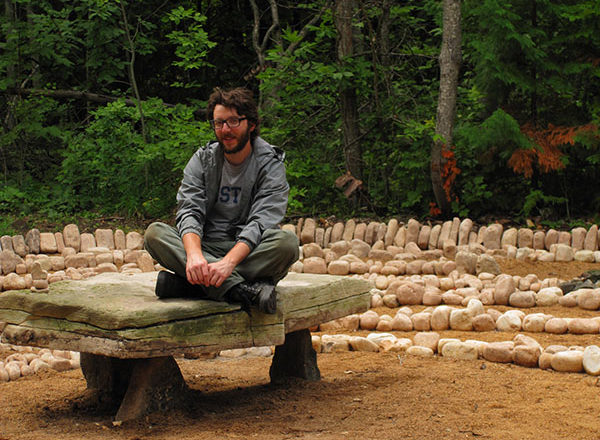 Nate Bond sits on the Nordic bench in the labyrinth he built in 2012. Submitted.

Even before we began our summer landscape intern program, The Clearing had a long history, post-Jensen – he died in 1951 – of introducing landscape architecture students to The Clearing, an important part of Jensen’s legacy. 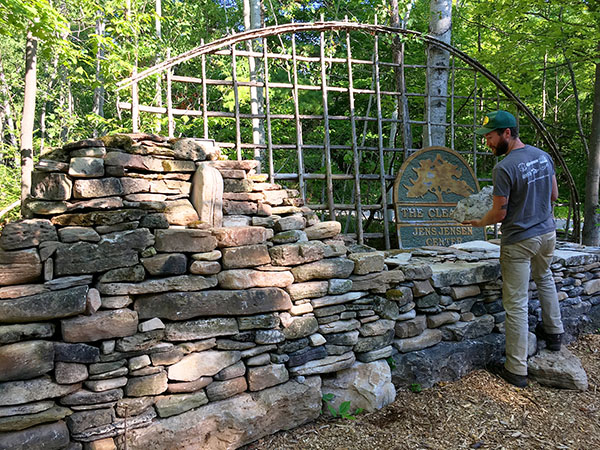 Will Linscott, The Clearing’s 2018 intern, works on the stone wall on Garrett Bay Road at the driveway entrance to the Jensen Center. Submitted.

Starting in the early 1970s, when Darrel Morrison began bringing his University of Wisconsin-Madison students to The Clearing, and continuing to this day, many landscape architecture student groups have come to The Clearing, usually in spring, before our season of week-long classes begins. Typically, they are here for a long weekend, spending one day doing landscape-related projects and another day discovering, absorbing and enjoying The Clearing. During their stay, they learn about Jensen’s vision for this magical place and gain an increased appreciation for the profound impact he had on the art of landscape architecture and on the early land conservation movement. 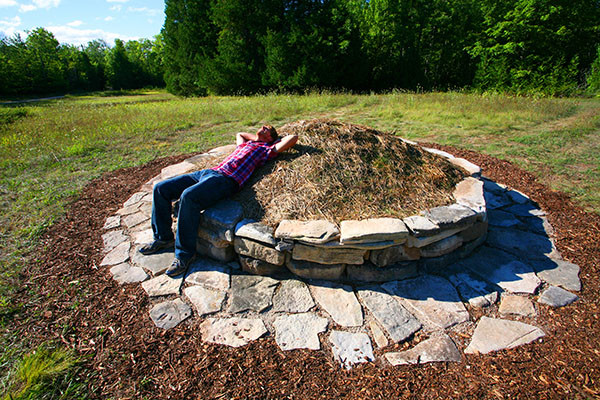 In 2010, after 10 years of spring visits, and after an already strong relationship had developed between The Clearing and the University of Minnesota’s Department of Landscape Architecture, the two institutions agreed that The Clearing would hire one first-year graduate student each year to work on landscape-related projects during the summer months. Since then, in addition to lending a hand with a variety of much-needed landscape maintenance tasks, including helping with invasive plant control, many important landscape-related projects have been done by our University of Minnesota summer interns. These include the Lodge and Schoolhouse meadow renovations in 2010, the star gazing ring in 2011, the labyrinth in 2012, a flagstone terrace and stone wall on the west side of the Lodge in 2016/2017, several new hiking trails created in the past five years, a retaining wall near our new blacksmith forge building in 2017 and five small flagstone terraces outside dorm rooms, also in 2017.

This year’s Clearing Landscape Intern, Will Linscott, has helped create a new entrance area at the Schoolhouse that includes a wide flagstone walk and a free-standing dry-stack stone wall. (Will did this work with Nancy Aten, The Clearing’s consulting landscape architect and her husband, Dan Collins, along with Clearing Board member and accomplished stone wall builder Dave Bultman.)

Will also completed a large stone wall at the new entrance to the Jens Jensen Center on Garrett Bay Road, a project started by last year’s intern, Isaac Hase-Raney and designed by Erik Rinkleff. And Will did several native plant landscape plantings at the Jens Jensen Center, worked on the landscape in the new parking lot at the Jensen Center and has done much work on our ever-expanding and increasingly important invasive plant control program, working on eliminating forget-me-not, dame’s rocket, valerian, white sweet clover, creeping bellflower, helleborine orchid and everlasting pea.