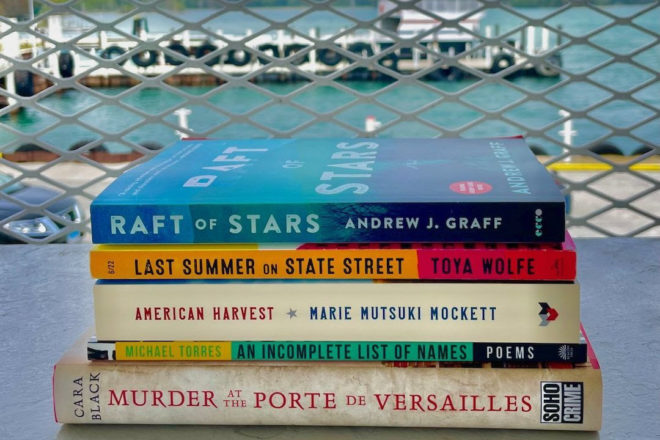 Heading to Washington Island in 2014 for my first experience of the literary festival I’d heard raves about, I caught the mystical, 10 pm “late boat” at Northport. I’d driven straight through from Buffalo, New York, and was both exhilarated and exhausted after 13 hours behind the wheel.

I strolled the decks, listening to the ferry thrum, balancing against its heaves, sucking up the lake air. I was also trying to remember how to light the oil stove in the cabin, because as a schoolteacher, I seldom have a chance to travel “north of the tension line” after summer.

Miraculously, I’d slipped the noose of my hectic, mainland life for a glorious autumn weekend of literature. It would resemble the luxury of reading before the rustic fireplace at my family’s cabin, only better: I’d be in the company of other booklovers, at an event created by booklovers who understand that Washington Island + books = magic.

I noticed a man who seemed as excited as I was. Up and down the ferry steps he went, leaning over the rails or staring at the starry sky. He, too, looked like he could hardly believe his luck, encountering such adventure at the tip of the Door.

“I’ll bet that’s the poet,” I thought. And sure enough, it was Max Garland, 2013’s Wisconsin poet laureate, on his way to present at the festival.

Later he told me, “I’ve been everywhere in Wisconsin. Everywhere. But this – this is different.”

Island literary enthusiasts Helene Meyer, Betsy Wallman and Kathleen Dixon founded the festival in 2012. Their experiences with operating and working Island Time Books and jaunts to booksellers’ conventions and literary festivals large and small led them to believe a festival could succeed on the island. Helene’s husband, Gene, longtime director of Washington Island’s Trueblood Performing Arts Center (TPAC), consistently advocated for the venture.

Upon Gene’s unexpected death, the TPAC’s director approached Helene, asking how Gene’s memory might be honored. Her quick answer was a new event: the Washington Island Literary Festival.

The first iteration featured 11 Wisconsin authors, 80 attending readers and a few aspiring writers. The event featured unique, beautiful island venues, including the boathouse on Rock Island State Park. Participating writers and attendees got a real feel for the island, its remote beauty and adventurous solidarity.

Since 2013, the festival has crossed and recrossed familiar territory while also expanding its borders and reach. Along with regional authors, writers of national and international renown have crossed Death’s Door to join the ranks of presenters at an event that’s now focused on just five to seven presenters each year.

In addition to Saturday’s core session of presentations, meet-and-greet opportunities, book signings and fellowship, the festival has grown to offer workshops for writers and readers on Friday, as well as a Thursday Creative Lab that’s free and open to everyone.

After my own first festival, I was hooked and jumped at the chance to join the crew of enthusiastic volunteer organizers. Pulling off an island gig can often mean packing one’s car with pump coffee pots, ice chests and pumpkins; hauling flowers from the farm museum to the TPAC to the Red Barn; or heading off to scour the island for a lost writer.

Adventuring by the seat of our pants was exhilarating, but chaotic, so it was wonderful in 2020 to find a secure administrative harbor with Write On, Door County, under the aegis of longtime festival volunteer Jerod Santek. This harbor provides broader and better ways to establish connecting paths with literary enthusiasts throughout Door County.

After presenting virtually in 2020, the festival was back in person last year, enjoying the island in various outdoor settings of beauty, including the TPAC’s open-air pavilion.

The theme for the 10th annual Washington Island Literary Festival is “Crossroads” and features authors Cara Black, Lyanda Haupt, Andrew J. Graff, Michael Torres and Toya Wolfe. We’ll listen, read, write, discuss, create and muse about crossroads: where we are and where we’re going. Attendees will gather for the weekend – or even just a day – because a special, mystical late ferry on Saturday night will take them back to the mainland.

Find more information at wilitfest.com, and browse the featured festival books at fairisleshop.com.

Peninsula Arts and Humanities Alliance, which contributes Culture Club throughout the summer season, is a coalition of nonprofit organizations whose purpose is to enhance, promote and advocate the arts, humanities and natural sciences in Door County.