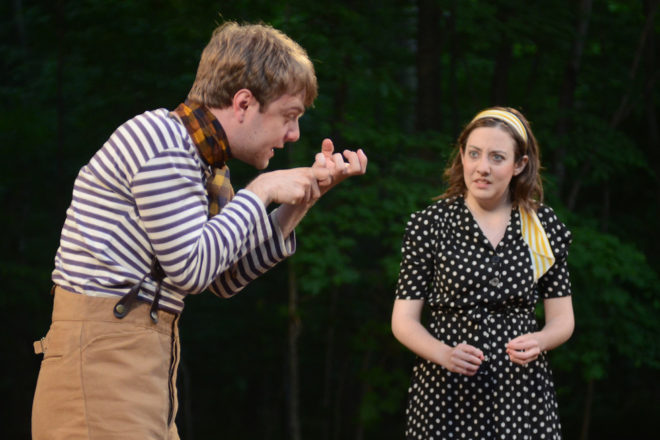 Joe Boersma and Elyse Edelman in the 2014 production of The Comedy of Errors, directed by Leda Hoffmann. Photo by Jason Fassl.

It was very late November 2017 when I walked into the Door Shakespeare office as the new producing artistic director for the first time. I knew one thing was certain:  the summer season was to get underway in less than six months. Plays had not been selected, actors and designers had not been engaged, and there was no support staff.

I reached out to directors Joe Hanreddy and Leda Hoffmann. I had been impressed by their past work and was looking for directors with experience directing out-of-doors and who had a positive relationship with Door Shakespeare.

Joe and I agreed upon Much Ado About Nothing. Leda had directed Romeo and Juliet, The Tempest and The Comedy of Errors for Door Shakespeare, and they were met with great success. Leda and I met, discussed a few possibilities, and landed on … The Comedy of Errors. Yes. Though Leda had directed the play in 2014, I thought it important to choose a play that was full of joy, would have broad appeal, and would have strong box office potential. In my position as producing artistic director, I am charged with both the artistic and financial health of the organization.

I recently sat down with Leda in the beautiful Garden at Björklunden to chat about The Comedy of Errors.

Michael Stebbins (MS):  Leda, you directed The Comedy of Errors for Door Shakespeare in 2014. When we talked of revisiting the play, were there any apprehensions? Any attractions?

Leda Hoffmann (LH):  The first question to ask when thinking about revisiting a play is “why?” There’s an initial fear of doing something just for the sake of doing it, but I saw an opportunity to come back to a play that brought artists and audiences a lot of joy in 2014 and I would like to see if we can find that joy again.

LH:  A remount ties us down to choices made in the past. Instead, this production is a fresh look at the story. We have assembled quite a few actors making their Door Shakespeare debut, plus two first-time designers, and with this unique collection of people looking at this play this time, we’ll discover the world of the play together. Since some of us have worked on this play in this space before there are sure to be similarities in some of core ideas, but we get to approach it anew. I believe wholeheartedly in creating work that comes from the specific artists involved in a production so just having new people makes this inherently new. We also have live music whereas the 2014 production was recorded.

MS:  Much Ado About Nothing is set in a specific time and place: July 1865, Door County, Wis. Where and when is The Comedy of Errors set? How do costumes, scenic elements, props and/or music assist in creating the “where and the when?”

LH:  The physical space where a production will take place is always my jumping off point for deciding what a production will look and feel like. The Comedy of Errors is an urban play, taking place in a bustle port town, but knowing this production is surrounded by nature, I think about a slightly more rural, less industrial shipping town.

This production isn’t set in any specific time. The design team and I set out to create a world that feels of a past era enough that we don’t worry about why no one just called someone on their cell phone, but contemporary enough that we all lean into the story as it relates to our time. We have used research images starting in the 1930s to today.

MS:  Before the full company meets for the first rehearsal, on June 4, how do you prepare for what is to be a relatively short and intense rehearsal period?

LH:  Read the play a lot. Be familiar with the ins and outs. Have solutions in mind to any tricky logistical issues so that we can explore, but if we don’t figure it out, I have a way out.

I have been working with the design team to define our world – visually and aurally. Now it is my job to communicate that world to the actors so that they can start to build their own part of it. I heard once that a director is the architect of a playground. You don’t have to tell people to first use the slide and then the swings but if you build a space where the slide ends at the swings, that rhythm will follow. On day one I need to be ready to define the space in which we can play. With a strong framework, actors have a foundation on which they can make bold choices.

MS:  You have directed at some top regional theaters and Shakespeare festivals. What is it about directing at Door Shakespeare that appeals to you?

LH:  First off, getting to work with the smart, talented and generous people that make up the Door Shakespeare Company each season.

And then there’s the beautiful space. Being outside around a maple tree with limited scenic elements, you’re forced to focus on the heart of the story, and there’s no stuff to get in the way. I love the simplicity of the storytelling.

MS:  Door Shakespeare has assembled a wonderful ensemble of actors, designers and interns (and directors) for 2018. There is the old movie/theatre adage that “directing is 90 percent casting.” Is this true?

LH:  Getting the right group of collaborators is essential. I like to build productions that are right for the particular group of people assembled at that particular time. So in that way, casting is everything because the production would be different with different people. Theater is wonderful because it is not created in a void. The success of a production depends completely on the team behind it. If, in this context, casting also includes selecting designers, technicians, and all the other people who work on a production, then I’d say directing is 98 percent casting! Directors lead the team but they are nothing without the players.

All performances take place in the Garden at Björklunden, 7590 Boynton Lane in Baileys Harbor.