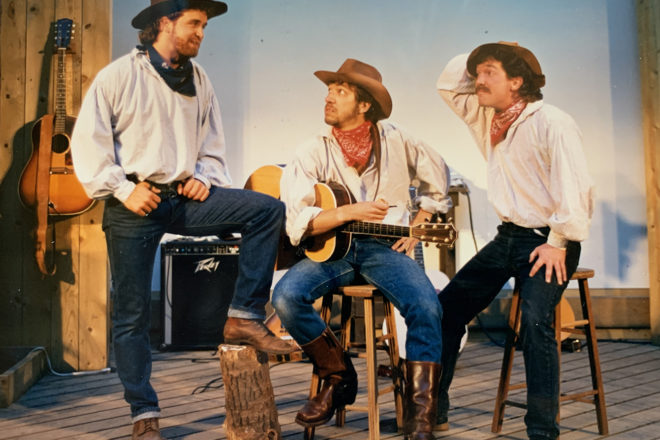 (From left to right) Fred Alley, Doc Heide, and Gerald Pelrine, co-founders of American Folklore Theater (AFT) performing in a 1986 Heritage Ensemble show Out of the West. 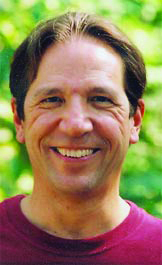 Fifty years ago this June, a providential event transformed my life and led to the birth of Northern Sky Theater. And it launched a passion for songwriting that blossomed into a book to be released this summer.

In June of 1972, I’d just finished my sophomore year at University of Wisconsin-Green Bay. I lived in a dank, unfinished basement near the East River. I had no car. To take a weekend breather from a job scraping house paint under the searing sun, I hitchhiked up to Peninsula State Park to camp out with a friend and her family.

South of Fish Creek I caught a ride with a long-haired musician named Mike Raye driving a rickety station wagon.  He was in a new troupe sponsored by UW-GB called the Heritage Ensemble.  They were performing a show that night in the park called Song of the Inland Seas. He suggested I check it out.

I suspected that watching a show put on by college students in a state park would be like watching paint peel off the house I was scraping. But I held my tongue. After dinner, my friend and I decided to stroll to the Amphitheater to investigate. I mean, how bad could it be? But the show turned out to cost 50 cents, a small fortune to a guy surviving on canned Progresso pea soup. My friend and I waited for it to start, then crept into the woods to watch.

I was blown away. Dressed in ornate 19th century costumes and playing guitars and electric bass, the group sang authentic folk songs of Great Lakes sailors, Wisconsin lumberjacks, and UP miners interwoven with stories and period humor. I had no idea that our region had even produced folk songs — I thought folk music was Home on the Range.  The performance was rousing, evocative, even profound.

That fall at UW-GB I saw a poster announcing auditions for the troupe. To my amazement, I got accepted. Soon our ensemble trio were performing lumberjack songs at Kiwanis Club fried chicken dinners.

The following summer I got into the Peninsula troupe.  For me, the Heritage Ensemble was a match made in the stars. I loved American history and the troupe’s Broadway-style arrangements. Performing by moonlight in a forest for eager campers was delightful. And the ensemble’s philosophy was collaborative. If we wanted to add instrumentation or harmony or even a song we’d uncovered, ensemble founder Dave Peterson was always welcoming.

Once I graduated, I figured out how to return to Wisconsin in summers from my Pennsylvania doctoral program. When I got hired to teach clinical psychology in Berkeley, I insisted they let me go a few weeks early to do the ensemble. And when Dave retired in 1990, he gifted the theater to me and another longtime ensemble member, Gerald Pelrine.

By this point I’d been writing one ensemble show each year since 1984. This involved matching historical tales with folk songs that illustrated them. But when no song was available for a certain theme, I’d write it myself. In a few years I’d accumulated enough to form the basis of a CD, Lessons I Learned from the Moon.

Fred Alley, my friend and fellow ensemble member, moved to California in 1990 to produce it and add his shimmering vocals. After a year of resisting, Fred succumbed to entreaties from Gerald and me and got onboard our new American Folklore Theater (renamed Northern Sky in 2015).

In the ensuing years, I wound up with 54 songs that will be included in a book to be published this summer. Titled Tangled in Wonder, it includes melodies, chords, lyrics, and musings about each song. About a dozen songs come from Ensemble or AFT shows; the rest are just stuff I was moved to write.

Turns out that a hitchhiking trip 50 years ago brought us all a long way down the road.