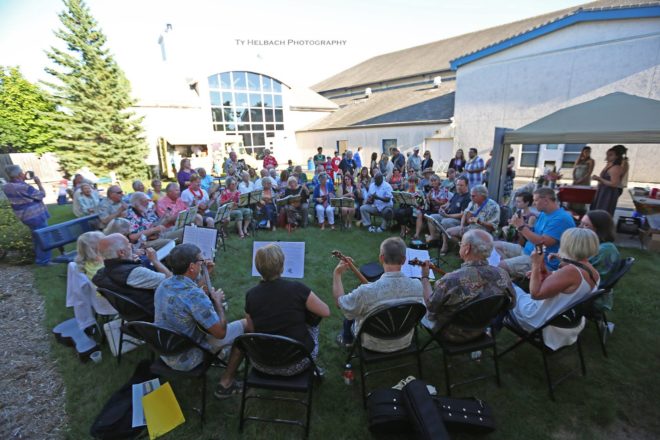 A community uke jam was held in connection with virtuoso Jake Shimabukuro’s last visit to the DCA. Photo by Ty Helbach.

The ukulele in Door County and beyond

The ukulele arrived in Hawaii from Europe during the late 1800s. A Portuguese immigrant named Joao Fernandez arrived by boat and wowed Hawaiians with his miniature guitar called a branguinha or machete. The locals, fascinated by Fernandez’ fast picking, called the instrument a “ukulele” (pronounced oo-ku-lay-lay), which means “jumping flea.” Its popularity spread, and by 1900, the sound was quite familiar throughout the Hawaiian Islands.

The Panama Pacific International Exposition introduced the instrument to the mainland in 1915, when 17 million expo goers visited the Hawaii Pavilion. Sears Roebuck began to cash in on the subsequent rising popularity of Hawaiian kitsch goods and art by offering the instruments for sale. Purchases of the inexpensive – and relatively easy to learn and master – instrument were steady. Tin Pan Alley songwriters followed suit by writing cutesy hits such as “On the Beach at Waikiki” and “Oh, How She Could Yacki Hacki Wicki Wacki Woo.”

The popularity of the ukulele got another boost during the Depression when many other instruments were too pricey for cash-strapped families. The instrument’s prominence in pop culture remained strong, and in 1950, TV host Arthur Godfrey gave lessons on his popular show. But as rock ’n’ roll music and bravado began to gain momentum, Godfrey unintentionally ruined some of the instrument’s appeal for the younger generation by saying, “If a kid has a uke in his hand, he’s not going to get in much trouble.” Tiny Tim further tainted the instrument’s relevance in the 1960s with his campy “Tiptoe through the Tulips.”

The instrument remained out of favor for a couple of decades but began reemerging in the ’80s and ’90s. The revival of Hawaiian music and the ukulele’s inclusion in popular music helped to shift perceptions about the instrument yet again. In 2006, a ukulele in the hands of virtuoso Jake Shimabukuro appeared front and center in one of the first YouTube videos to go viral. In it, Shimabukuro – who will be returning to Door Community Auditorium (DCA) on July 26 – played and slayed George Harrison’s “While My Guitar Gently Weeps,” stretching the instrument’s range and making big waves for his career.

Shimabukuro commented, “The ukulele has always fascinated me because it doesn’t intimidate other people.”

With its four nylon strings, the ukulele is easier to play than other stringed instruments. It also remains relatively inexpensive, and it’s a great tool for spreading joy and encouraging multigenerational interaction.

Shimabukuro first performed at Door Community Auditorium in July 2016, a decade after that YouTube video. More than 70 Door County residents and visitors of all ages participated in a community uke jam prior to the concert. That performance and jam were so well received that DCA hosted a uke jam and screened the Jake Shimabukuro documentary Life on Four Strings in January 2017. Thirty uke players sang and played, and more than 200 community members attended the screening. That same winter, DCA’s Fireside Lobby was the weekly home to one of the county’s three ukulele groups.

A free community uke jam on July 26 at 6:30 pm will again precede Shimabukuro’s performance at 8 pm. Participants will include members of Door County’s ukulele groups, individuals, students of the Sturgeon Bay Boys & Girls Club’s ukulele program, and a group from the Fox Valley’s Hortonville High School, whose band director, Greg Forten, will lead the third community uke jam. He also leads Forté and the Pianissimos, an eight-piece ukulele band.

“The ukulele has a long history of going in and out of being a popular instrument,” Forten said. “However, this time around, it seems to have taken the world by storm. The easy-to-learn instrument stretches all styles of music and seems to be connecting generations like never before.”