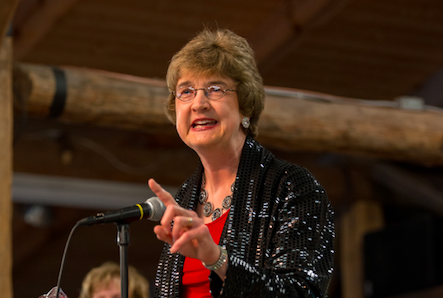 by Mona Christensen and Emily Maher

Performers everywhere experience some form of performance anxiety or “nerves,” and musicians at the Birch Creek Music Performance Center use a variety of approaches to counteract this stress.

Imagine teaching 92 students each week in your own music studio. Add the duties of serving as the Wisconsin Youth Symphony Orchestra’s (WYSO) director of percussion. Throw in some freelance performances. And find time for a personal life.

Twenty years ago, Birch Creek Percussion & Steel Band faculty member Vicki Peterson Jenks did not have to imagine the huge stress that resulted from such a workload because she was living it. Though she was doing work that she loved passionately, it was taking a toll on her well-being, and she wanted to do something about it.

“I had also become quite overweight,” Jenks said. “Though no one recognized it on my six-foot-tall frame, I felt it and knew it.” She decided to take yoga and tai-chi classes in Madison, where she lived at the time. “Within just a few months, I started to feel better and everything – though not perfectly – began to make sense and fall into place,” she said.

Fast forward to the 2019 Percussion & Steel Band Academy Session at Birch Creek, where you could find Vicki Peterson Jenks beginning each morning by leading a yo-chi class with Birch Creek music students, ages 13 to 19, who were attending the percussion session.

The yo-chi class that Jenks conducted was based on a tai chi presentation and class that she gave at the 2017 Wisconsin Music Educators Conference. The students learned about this ancient Chinese martial art, as well as yoga positions and breathing techniques, to calm the mind and achieve better balance, posture and weight distribution. Jenks wanted the students to learn ways to promote overall good health, quality of life and the self-discipline that comes from regular practice.

“Certainly, yo-chi is not a panacea or a ‘quick fix,’” Jenks said, “but the students in WYSO and at Birch Creek began to comment on how the practice was helping them in school, at home and, really, everywhere.”

It turns out that Vicki Peterson Jenks is not the only Birch Creek faculty member who seeks to improve health and well-being while pursuing excellence as a musician and educator. Charles “Charlie” Schuchat plays tuba for the Chicago Sinfonietta, Elgin Symphony Orchestra and Joffrey Ballet and is an associate professor at the Northern Illinois University School of Music and a faculty member at Roosevelt University’s Music Conservatory in Chicago. He began teaching tuba students during Birch Creek’s Symphony Academy Session five years ago and introduced a new class called Mindfulness in Music to the 50-plus students.

Schuchat explained, “It is an introduction for students to think about practicing and performing on their instruments in a mindful way. For example, rather than just playing through a piece over and over …, they step back from playing it on their instrument and make sure they have a clear idea in their mind of what they are trying to communicate to the audience. That could mean singing it; or playing it on a keyboard to hear all the intervals, notes and rhythms correctly; or trying to really understand the emotional and dramatic aspect of the music the composer was writing about.”

For Schuchat, this approach began when he studied the Alexander Technique – a body/mind system that seeks to rid the body of harmful tension – many years ago to help with posture.

“I found it really fascinating that if my body was relaxed and really free of tension, it was much easier to play difficult or technically challenging music,” Schuchat said. “Later on, I began practicing yoga and found that I would enjoy a concert much more if I had practiced yoga that day.”

During the Mindfulness in Music class, Schuchat began by leading the students in simple stretches. They also learned several breathing exercises and talked about how to focus on breathing slowly as an easy way to focus their thoughts on the present rather than anticipating how the performance might go.

The benefits of such exercises go beyond the practice session and classroom for Birch Creek students and faculty – they are seen and heard in the brilliant performances that concertgoers experience at Birch Creek throughout the season.

The Peninsula Arts and Humanities Alliance, which contributes the Culture Club section throughout the summer season, is a coalition of nonprofit organizations whose purpose is to enhance, promote and advocate the arts, humanities and natural sciences in Door County.