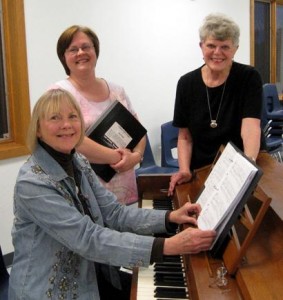 Joyce Morehouse, Managing Director of Island Players, nurtured an idea for a long time. Back in the mid ‘90s, when she was director of the Cranbrook Theatre Summer School in Birmingham, Michigan, she oversaw a production of the musical, Oliver, and when she retired from a career teaching high school English in 2000 and moved to Washington Island as a permanent resident, she was well aware of the trove of musical talent, beginning with the very young, on the island. “Why not Oliver here?” she thought. Then, in 2004, a fully professional theatre, the Trueblood Performing Arts Center opened, and she knew, “We can do Oliver there!”

Finally the time was right and on a fine 2007 summer afternoon at Schoolhouse Beach, Joyce spread her blanket next to Kari Gordon, director of the island’s Scandinavian Dance Festival, to talk choreography. A chance meeting on the ferry with Joan Reynolds, director of the Red Rose Ragtime Band, and she had a musical director.

These three exceptionally experienced and talented ladies joined forces and began plans for Island Player’s 2008 summer production of Oliver, arguably one of the most complex, demanding, and perhaps risky of Island Player’s endeavors. Island Players has never attempted a Broadway musical before, although in 2002 Joyce and Joan collaborated to produce a highly successful Salute to Musical Comedy.

All three women have long-standing ties to the island. Kari’s roots go back several generations. Her maternal grandfather was once keeper of the light on Rock Island, and her grandmother was a founder of the Scandinavian Dance Festival, now in its 60th consecutive year. Kari succeeded her mother as director in 1978. Folk dancing and particularly the dances of Sweden and Norway have been Kari’s passion all her life. She spent an interim during her college years in those countries studying and dancing and has made several trips since, researching and expanding her repertoire.

After graduating college, Kari taught music at Southern Door for five years, where she directed several musicals. In 1994, she was asked to coordinate a group of dancers representing Norway at the World Cup, held at Chicago’s Soldier Field. She is presently a full-time music teacher in Kenosha, WI and teaches the Children’s Music Camp for the annual Washington Island Music Festival.

I asked Kari how a background in Scandinavian folk dance transferred to a mid 19th century story set in the slums of London’s East End. “I let the music tell me. From that I get the style, the moves,” she replied.

It helps that she has worked with many cast members, children and adults, during her long tenure as the dance festival director. “Some I’ve known since they were two years old,” she said.

Joyce has been immersed in community theatre since the age of three, when she first saw her parents on stage, realized they were pretending, and thought, “I can do that.” She began acting in community theatre herself while still in high school. After graduating from UCLA, she began her career teaching English, coaching forensics, and directing children’s summer theatre, all the while acting in local productions, capturing roles in many of the great plays of the past 40 years.

Joyce began summering on Washington Island in the 1980s and has, from that time, been involved with Island Players. Upon retiring to the island, she was immediately asked to join the Island Players board, and in October 2000 became its Managing Director. She has directed many island productions, most recently Diary of Anne Frank last summer, and honed her acting skills playing multiple roles in this winter’s production of seven short plays by David Ives.

Joan Reynolds once said to me, “I have to make music to be happy. I can’t remember a day when I didn’t play the piano.” Born in Michigan’s Upper Peninsula of Swedish immigrant parents, she majored in voice and earned a degree in music education at Michigan State University. This led to 30-plus years teaching music in junior high school, but, like Joyce with theatre, Joan’s life was full of musical endeavors on the side.

Coming of age in the ‘60s, she taught herself guitar, bought flowing dresses, and got herself on the entertainers’ list put out by the Art Institute of Chicago as a folksinger. She also sang frequently in local musical comedy productions. Then one of those serendipitous things happened: Joan met a protégé of Eubie Blake, the great ragtime composer. She began playing piano for ragtime gigs and in 1981 founded the Red Rose Ragtime Band. It has performed continuously in the Chicago area and from Connecticut to California ever since.

Her connection with the island began in 1993, when she and husband Mac, built a log cabin on the northwest shore. She is a familiar and wildly popular entertainer on the island both solo, in combination with island musicians and with her band.

Because of their common experiences in education, music, and theatre, Kari, Joyce, and Joan are adept at guiding a cast of 24, including 12 students ages 8 to 18, and an additional 12 potentially unruly adults. Rehearsals have been in full swing since the first week in May, now greatly accelerated with Kari and Joan on the island full time.

Oliver will be presented on Saturday, Sunday, and Monday evenings, July 5, 6, and 7 at 7:30 pm at the Trueblood Performing Arts Center on Washington Island. Tickets are $12 for adults; $6 for children, and are available, beginning June 21, at the Red Cup Coffee House and the Recreation Center. Tickets may be purchased via phone (920.847.2709) and will also be on sale at the door.

Island Player’s production of Oliver is made possible in part by a grant from the Peninsula Arts Association and the Wisconsin Arts Board.