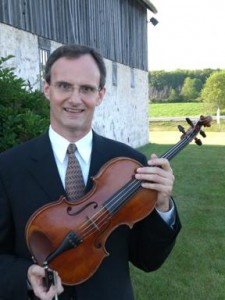 Matt Mantell with his viola before a 2007 solo performance of Bruch’s Romance.

In the late summer afternoon, an audience of blue stackable chairs lines up in rows in Birch Creek’s 100-year-old performance barn, waiting for evening when they will be filled with concertgoers. In this quiet moment, amber sunlight slips through spaces in the barn’s siding and falls across the chairs. Just a few hours from now, crowds filling the chairs will be thrilled by live music.

This is the performance center to which Matt Mantell and fellow Birch Creek faculty members return year after year from around the country for a chance to work together. The high percentage (98 percent) of returning professional performers/faculty is noteworthy, especially considering many give up engagements for higher pay and arrange their schedules to include two weeks each year at Birch Creek.

“It’s an opportunity you can’t put a dollar amount on,” Mantell reflects.

In the pages of Birch Creek’s collected archives, in an interview with Mantell, lies the essence of why so many faculty members return to the Egg Harbor campus to teach and perform. “It’s a beautiful place,” Mantell muses. “It’s just the right atmosphere for some good work to happen.”

Mantell would know. He has been coming to Birch Creek since the eighties, when – as a junior in college – he was invited by Birch Creek founder Jim Dutton to fill the position of viola teaching assistant in the Symphony Session. Now principal violist for several Illinois symphonies and a private teacher, Mantell carves out two weeks each summer to teach and perform in this barn as a member of the Birch Creek Symphony Orchestra. Matt has seen the symphony program grow from a small number of faculty and students performing mostly chamber music with primarily woodwind and brass orchestration to a full 80-piece symphonic orchestra.

Mantell will be inducted into Birch Creek’s 20 Year Club this year, a recognition honoring faculty with 20 years or more of service to the performance school. In 2008, club membership will nearly double – from three to five – with 118 combined years of teaching and performing at Birch Creek. 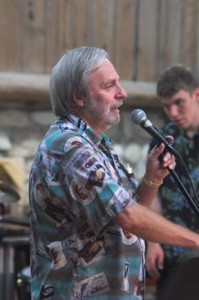 Al O’Connor introduces the steel band from the stage at Birch Creek.

Marking his 25th anniversary at Birch Creek this season is G. Allan (Al) O’Connor, who arrived at the performance school in the early eighties – again by invitation of Jim Dutton.

“We were percussion teachers at colleges in Illinois – sometimes fighting for the same students, sometimes performing together,” O’Connor remembers. Dutton headed the percussion department at the American Conservatory of Music in Chicago, while O’Connor, head of percussion studies at Northern Illinois University in DeKalb, had started the steel band program there in 1973. It was the first actively performing steel band formed in an American university.

“Jim knew that I had a steel band program going [at NIU],” O’Connor continues, “and he was looking for ways of expanding the percussion arm at [Birch Creek].”

O’Connor smiles. “‘Well, all right,’ I said to him, ‘I’ll come up there for one year and we’ll see what we can get together.’”

Twenty-five years later, O’Connor is still directing the steel band at Birch Creek. O’Connor figures prominently in the history of the rise of steel band in America, particularly at meeting the challenges of launching an academic program. Not only has O’Connor provided a curriculum model for steel pan at the university level, but he has also expanded the percussion program at Birch Creek to include a steel pan area of emphasis.

O’Connor returns to Birch Creek each year because teaching on the 40-acre campus gives him an opportunity to do something for two weeks that he doesn’t get to do for the rest of the year – to concentrate only on the music he loves, without distraction. That immersion and focus, too, creates just the right atmosphere for some good work to happen. 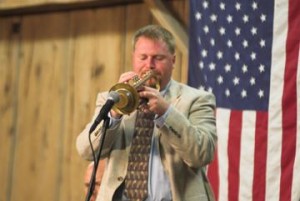 Nothing would keep Gil Wukitsch away from Birch Creek. Well, almost nothing.

This would have been Wukitsch’s twentieth year directing student bands for Birch Creek’s Big Band Jazz Session, teaching trumpet and playing in the Faculty Academy Big Band. And, he would have been inducted into the 20 Year Club, too. But the club will have to wait until next year for Wukitsch. He and his wife, Danielle, are staying home in St. Charles, Ill., awaiting the birth of their first child.

“I started at Birch Creek as a student,” Wukitsch recalls. “I had just finished my freshman year at St. Charles East High School. [Attending Birch Creek] was a huge step forward.” During his two-week jazz session as a student, Wukitsch had become completely immersed in music and returned to St. Charles with an in-depth interest that eventually led to a bachelor’s degree in music education and a master’s in educational leadership. “Birch Creek made me think that music was the direction I wanted to go.” Go he did, not only to become director of jazz bands at his high school alma mater in St. Charles, but also to tour and perform with the likes of flugelhorn pioneer Clark “Mumbles” Terry, drummer Harold Jones (a Birch Creek faculty member when not touring), and pop/jazz vocalists The Manhattan Transfer.

Wukitsch thinks a moment. Then he says, “Birch Creek is very unique. We [the faculty] return year after year because it’s a chance to teach enthusiastic students and to play with top-of-the-line musicians.”

About this time of year, Birch Creek musicians hear an inner voice. “It’s time,” the voice says. “It’s time to start thinking about going to Birch Creek.” Ingrained in their beings, it is important for them to return. There, in an old barn with blue chairs, they find just the right place for good work to happen.