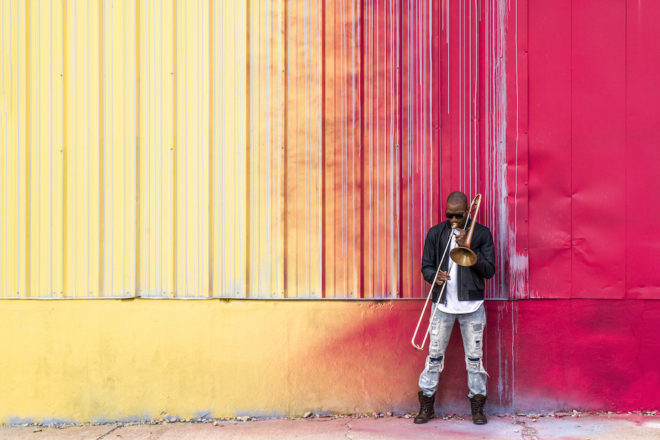 For a songwriter, Door County is a dream place to live. This peninsula has a number of songwriterly assets that I suspect would be envied even by the famously vibrant music communities of Nashville or New York City – a friendly population of songwriters, a plentiful array of music venues, and a bunch of generous, music-loving listeners. And for me, the place itself – its landscape, its people, its politics, its businesses, its history – is a frequent source of songwriting inspiration.

A strong sense of place is similarly influential for two of the most exciting acts coming to Door Community Auditorium (DCA) in June:  Trombone Shorty, whose unique blend of jazz, funk and hip-hop is thoroughly steeped in his hometown of New Orleans; and Margo Price, whose wild success as a singer-songwriter has deep roots in the soil of the Illinois farm country where she grew up.

Trombone Shorty (who will appear at DCA Thursday, June 14 with his band Orleans Avenue) grew up in New Orleans, first picking up a trombone at the age of four. By age eight, Trombone Shorty (born Troy Andrews) was leading his own bands in parades and even in bars. He remembers of his childhood bar gigs, “They’d have to lock the door so the police couldn’t come in.”

Trombone Shorty’s Crescent City roots are at the very center of who he is as a musician. In some ways, he said, he already feels himself memorializing New Orleans, as the city undergoes not only the normal evolution of time but the catastrophic change of Hurricane Katrina. “The Tremé,” Andrews said, “is the neighborhood where I grew up, but since the storm, many of the original Tremé people I grew up with can’t afford to stay there any more. So, in some ways, it is already a New Orleans that lives on in my music.”

Andrews cites New Orleans’ great melting pot of musical styles, as well as its resident musicians’ affinity for collaboration, as influencing his own willingness to move fluidly between musical genres. “In New Orleans, people are still influenced by one another,” he said. “You got these bands that play every week on Frenchmen Street, and on their breaks, they might go see the reggae band that’s right next door. You might get the musicians from the reggae band to sit in with the brass musicians. Everyone is having fun….We want to bring that joy to people, and bring joy to ourselves by seeing people dancing and having fun.”

Born three years before and half a country away from Trombone Shorty, Margo Price (appearing at DCA on Friday, June 15) grew up in the fertile farmland of Aledo, Illinois. Those roots are evident in the title – and the songs – of Price’s debut record, Midwest Farmer’s Daughter. Hearkening back to the tradition of autobiographical country albums like Loretta Lynn’s Coal Miner’s Daughter, Midwest Farmer’s Daughter combines Price’s lauded songwriting chops (she’s garnered the respect of Jack White and Willie Nelson, among others) with an authentic understanding of and respect for the place where she grew up.

Price, who now lives in Nashville, said it’s being away from her birthplace that has helped her appreciate it. “It just felt like there wasn’t much going on,” Price said of her hometown. “I always dreamed of a more romantic backdrop….The more I’m away, I think, the more I appreciate where I came from. Now, when I go back, I see the beauty in it.”

Price’s newest album, All American Made, is less autobiographical and more focused on the politics of heartache, pain, and populism that she now sees in small towns like the one where she grew up. Rolling Stone named All American Made one of the 50 best albums of 2017, writing, “Having staked out her own backstory and crafted her rabble-raising mythology on her debut, Price shifts her focus outwards at a heartland ravaged by sexism and poverty. After an opening series of expertly crafted country pastiches, All American Made indeed evolves into one of the most political country records in years, a declarative honky-tonk manifesto of small-town farmer populism and working-class feminism.”

All this talk reminds me of another delightful perk of being a musician in Door County – the neverending parade of world-class musicians who travel here to perform on the peninsula’s many stages, including DCA’s. There’s no one like traveling troubadours to illuminate the quirks of your own chosen home. I’d better go get my tickets!