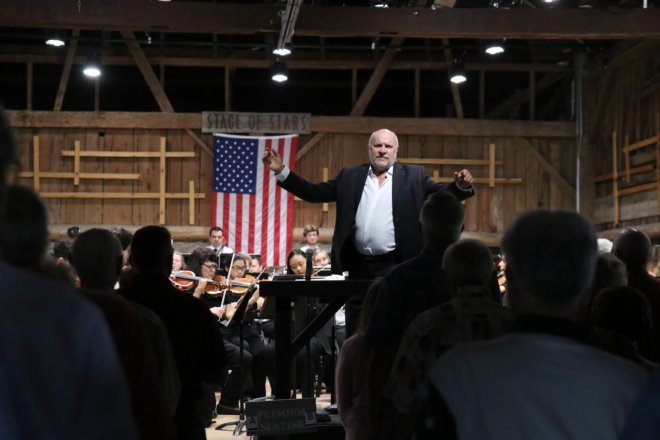 Sitting outside Birch Creek’s Dutton Concert Barn on a sunny, summer day, Brian Groner revealed that he didn’t think he would want to become a conductor.

“Because it’s a vain profession for people with big egos,” he explained with a serious look on his face. “So I avoided it.”

Groner ended up changing his mind, however, for the most part because of his mentor, Julius Stulberg.

“He’d see an article in the paper about a youth that had killed another child, and he would stop rehearsal of the youth orchestra and say, ‘My dear children, if you put a violin or a clarinet in their hands, there is no room for a gun, and no crime,’” Groner said. “I thought, ‘Well, what could I do to help with that?’”

A career in conducting kept Groner on the move, conducting national and international orchestras, including the Fox Valley Symphony in Appleton for 23 years. What he loved about conducting was the opportunity to go above and beyond to make an impact.

“I like to make it better,” he said. “So that they can convey something special at every point in time during a concert. So it’s not just one or two magic moments at a concert – there’s always that – but that, in every minute, there’s something that stops the breathing of the listener, and that’s the goal. You live for those moments.”

Known by his audiences for his witty interpretations and history lessons about serious orchestral pieces, Groner – an expressive, jovial man who exudes emotion and talks with his hands – developed his way of connecting with concertgoers by watching his minister father.

“Public speaking was required in our house. He was really funny, too,” Groner said with a smile. “I decided that I needed to draw upon that, because you don’t just charm the audience with your music. Because people listen at different levels. You have to deal with people where they are, and the best way to do that is to look them in the eye and say, ‘It’s all simple, and it’s all wonderful. This is what it is.’”

In 1993, he took his talents to Birch Creek’s summer academy at the invitation of then–Symphony Session program director Matt Mantell. At the time, the orchestra was playing waltzes and other arrangements suited for a few dozen students. When Groner walked into the concert barn for the first time, he envisioned

Groner started with music, including at least one piece of the standard orchestral repertoire on every concert because of Birch Creek’s mission to teach students what it’s like to be a professional musician.

Several years later, the number of faculty members and student musicians had both increased. They played full orchestral concerts, including West Side Story symphonic dances, for enthusiastic audiences.

“Outgrowing that stage caused the changes on campus,” Groner said. “We had to have more student housing; there was a faculty increase as well. We had to have more rehearsal and practice rooms, so new buildings had to be created, new faculty housing. The outgrowing of the stage was the focal point of Birch Creek’s growth.”

Filled with emotion, Groner said seeing the new campus buildings when he arrived in the summer of 2008 remains one of his fondest Birch Creek memories.

“When I saw the buildings, knowing what had caused them to be here, and how the whole institution was growing, it was so gratifying,” he said.

As Birch Creek continues to grow, Groner is passing the baton after 28 seasons with the symphony orchestra. He conducted his final concert July 4, 2022.

“It was emotional,” he said. “But I had to satisfy my mission for the July 4 concert because Americans see things differently, and July 4 should be the time when you rally together around that institution. I always get tearful at the [‘Star-Spangled] Banner.’ It had to be played, and it had to be enjoyed, and it’s a chance for Americans to come together. To do that here in this wonder of a place, it’s meaningful.”