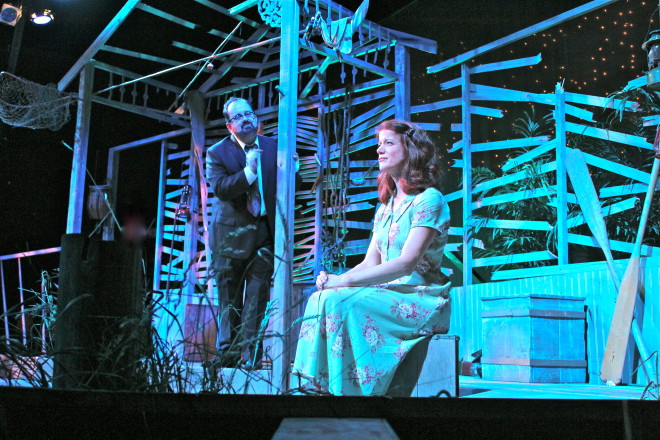 The opening of our next production, Irving Berlin’s I Love A Piano, will mark the 30th production of the Stage Door Theatre Company since its inception in June of 2012. This is at once a cause for celebration and a chance to clear up any confusion that still might be out there concerning the different names of our company.

When James Valcq and I arrived in October of 2011 as the new co-directors of the Third Avenue Playhouse, we decided to create separate entities within the playhouse to differentiate the unique programs each represented. StageKids is our educational outreach program for students in elementary, middle and high schools throughout the county; Music On The Main Stage is our ongoing concert series; and the Stage Door Theatre Company is our professional theater in residence. All of these separate entities reside under one roof as if TAP were a shopping mall and the different programs were stores within it. 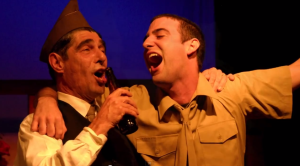 Mark Moede and Ryan Patrick Shaw in The Subject Was Roses. Photo by Steve Allen

Thirty productions of plays and musicals in four years is no small accomplishment and we are certainly proud of each one. But they say you never forget your first, and our first production of the Stage Door Theatre Company in the summer of 2012 was the Pulitzer Prize winning The Subject Was Roses. It set the tone for the kind of theater we wished to be known for: stories that represented the wide diversity of tastes and sensibilities of the residents and visitors of Door County.

That production inaugurated our new 84-seat Studio Theater space. It enabled us to present intimate plays in an intimate setting. There are only six rows with 14 seats in each. The room has the feel of being in a large living room. The performances literally surround the audience. It is an extraordinary experience that can only be had in such a space.

That first production also showed our determination to both hire actors from Door County’s extraordinary local talent pool and to bring in talented actors from outside of the county. That first cast consisted of one longtime resident (Mark Moede), one recent arrival (Ryan Patrick Shaw – now TAP’s Artistic Associate), and a visiting actor from New Haven, Connecticut (Dale Finn).

And we were off and running. 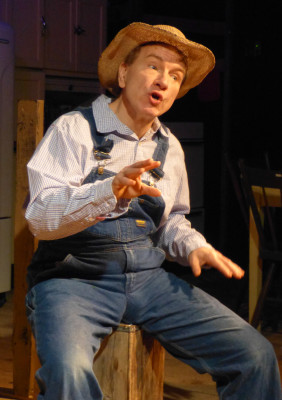 Doug Mancheski in The Drawer Boy. Photo by Edward DiMaio.

Since that time we have employed many of Door County’s finest theater artists including Amy Ensign, Doug Mancheski, Claire Morkin, and Chad Luberger. We have brought in artists from New York, Chicago, Minneapolis, Milwaukee and throughout Wisconsin – many of whom have returned again and again.

We operate with contracts from two professional unions: Actors Equity Association and Stage Directors and Choreographers Society. We are members of Theatre Communications Group, the national organization of non-profit regional theaters.

Along the way, we have developed a very loyal core audience that is growing with each and every performance, but still every audience contains people who have never visited our theatre before. It is very gratifying to see those people return and bring other people with them.

We have created summer internship opportunities over the last three years. Theater students from the University of Wisconsin –Green Bay, Lawrence University, Bard College (New York), and the University of Michigan have participated, providing us with their unique talents and energy and providing themselves invaluable practical experience working in a professional setting.

In our short four years here we have heard numerous comments from patrons – most of them overwhelmingly positive. I cannot begin to tell you what it feels like to hear people express over and over again how much our work here at TAP has positively contributed to the quality of life in Door County. Hearing things like that never get old – it is gratifying and humbling and we never take them for granted.

It isn’t always easy to do what we do. We can get so wrapped up in the day-to-day operations of the place that it can sometimes feel as if we’re rolling a 10-ton boulder up a hill in a windy snowstorm. Hearing comments from patrons delighted with what they’ve seen definitely lightens our load and proves to us again and again that we are doing something right.

Every once in a while, I think about what we’ve accomplished in such a short time and pinch myself for being so lucky to be here working at such a place surrounded by some of the most talented, gifted people I’ve ever had the opportunity with whom to collaborate. It is truly a dream job. And I’m not just dreaming it – I’m living it.

While it’s good and necessary to reflect from time to time, right now it’s time to return to work. Sylvia, our 29th production is now open and in performance [through Sept. 12], the 30th is in rehearsal, and plans are being made for the 31st and beyond. 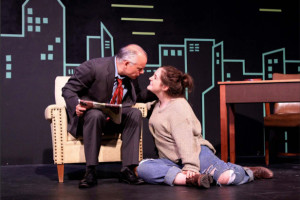 We are a year-round operation, so our work doesn’t end after the fall festivals are over. Check us out anytime between March and December (and occasionally in January and February). Chances are something will be happening on at least one of our two stages whatever time of the year you happen to be in our neighborhood.

If you’ve never been to a Stage Door Theatre Company production before, I invite you to please give us a try. I love showing off our theater. And if you are a regular patron, thank you. You have made it possible for us to continue to do what we do.