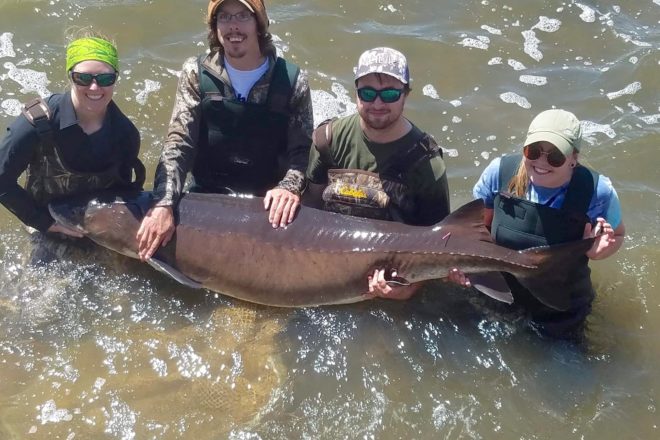 This 82-inch female lake sturgeon, with a 38-inch girth, was captured, measured, tagged and released by a research crew from the University of Wisconsin-Green Bay’s Aquatic Ecology and Fisheries Lab below the DePere Dam last year. Shown with the massive fish, which could have weighed up to 200 pounds (or more!), are volunteer Angie Grimm, research scientist Stefan Tucker, volunteer Jacob Pantzlaff, and UWGB student Ally McCutcheon. Photo by Jill Grimm.

It’s a reasonable question to ask. On one hand, you could easily assume that a bay named for a fish would boast a plentiful supply of said fish. But on the other hand, you might also expect that fish to be plentiful on local menus or the target of a thriving sportfishing industry.

The short answer is yes, there are sturgeon in Sturgeon Bay. Fishers also catch them from time to time, but it’s not a terribly common occurrence.

As of 2019, there were an estimated 3,000 adult sturgeon roaming the bay of Green Bay and its feeder tributaries – the Menominee, Oconto, Peshtigo and Fox rivers. That’s a far cry from the days before European settlement, when an estimated 1 million to 2.4 million sturgeon swam around in Lake Michigan and its surrounding waters.

Charles I. Martin – editor of the Expositor newspaper during the early years of Sturgeon Bay and the author of the 1881 History of Door County – attributed the naming of the city not only to the prevalence of the fish, but also because the outline of the bay itself resembles the snout and fin of a sturgeon.

But the prehistoric fish was nearly fished to extinction during the 19th century, largely for its eggs, which were then and are now still coveted for caviar. Because of this, there are many protections in place for sturgeon. Fishers may not sell or barter any eggs they catch. They may, however, have the eggs processed into caviar to use or give away, or they may donate the eggs to the Wisconsin Department of Natural Resources (DNR) for scientific studies.

Because there aren’t enough sturgeon to allow a legal commercial harvest, you won’t find the fish smoked or fried on any lake-to-table menus, or canned at the market.

The most robust sturgeon population actually thrives about 80 miles south of Sturgeon Bay in Lake Winnebago, where a population estimated at 40,000 sturgeon draws thousands for spearfishing season each winter.

The DNR is working hard to slowly revive the sturgeon population in Green Bay through a methodical stocking operation aimed at protecting the genetic diversity of the species. That diversity has served sturgeon well, said Mark Holey, a retired fish biologist with nearly 40 years of service to the DNR and the U.S. Fish and Wildlife Service.

“Sturgeon can live at least a hundred years, for sure,” he said. “Some of the big sturgeon out there have seen a lot more of the world’s time than you or I have. They have a genetic link to the dinosaurs. Those extremes they’ve lived through are hidden in their genes.”