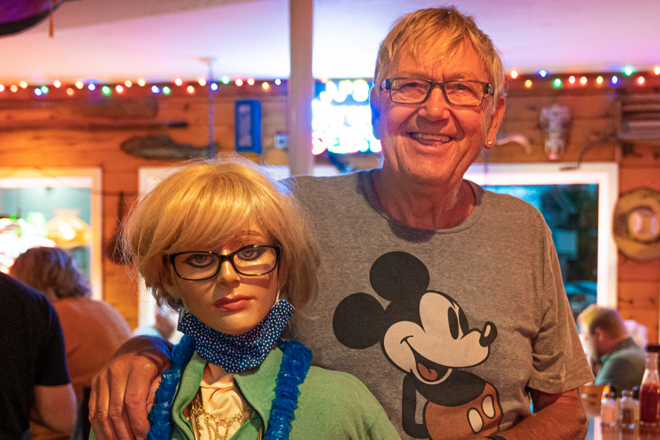 James “JJ” Johnson cozies up to Wanda at the end of the bar at JJ’s La Puerta. Photo by Brett Kosmider.

James “JJ” Johnson is known to have such an eye for a deal that he has a hard time passing them up. That’s how he once ended up coming back from a restaurant auction not with a cooler or a pizza oven, but with the whole darned restaurant.

Early in his days as a restaurateur, Johnson worked a much smaller deal that has brought him his most consistent customers.

“This guy in a motorhome pulled up and had some brochures and wanted to sell me one of these characters, as he called them,” Johnson said. “Well, I go out there with him and step inside and the whole motorhome is full of these things.”

JJ being JJ, he worked a deal and stepped out with two characters: a pirate and an old man named Mallard. They were the first of several to come that became hallmarks of the JJ’s La Puerta experience.

Diners love taking photos with the mannequins at the bar, and sometimes they like to do more. One female mannequin was broken when a regular decided to take her dancing in the street. And on slow nights at the bar, the exotic blonde character named Wanda has helped to drum up business.

“Sometimes, when it’s slow, we’ll sit Wanda at the corner of the bar,” JJ said. “Well, guys think it’s a chick, and they will drive by and do a U-turn. They come in and give her an eye down the bar for a few minutes before they realize she’s not real.”

Then there’s a disappointed “Pfff” and maybe a choice word or two, but by then, they’ve already bought a drink, and another JJ deal has paid off once again.