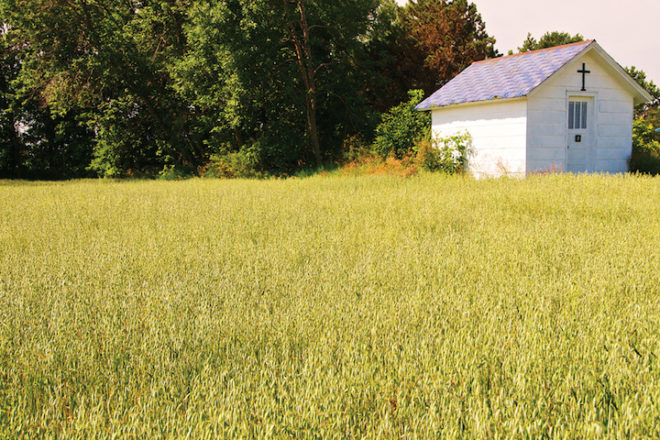 Along the roadsides of southern Door County, in the heart of the Belgian-American settlement, an observant traveler might notice small, unobtrusive buildings standing slightly apart from a brick farmhouse or painted red barn. These simple structures, built of wood and adorned with a cross on the roof or above the door, could easily be mistaken for a shed or even an outhouse. Rather, they are sacred spaces: roadside chapels erected by Belgian settlers and their descendants, never locked and open to all.

Today, more than a dozen Belgian wayside chapels are lovingly maintained, often by descendants of the families who built them.

Door, Brown, and Kewaunee counties contain the largest concentration of Belgian Americans in North America. Walloon-speaking Belgians arrived in the 1850s in great numbers, fleeing cholera epidemics and food shortages caused by a potato blight that had spread across Europe. More than 2,900 Belgians had settled in the area by 1860.

The new immigrants were devout but could not travel long distances to mass every week, so many prayed in their homes and in the tiny chapels they constructed near roads for the convenience of travelers and pilgrims.

These chapels were modeled after the wayside chapels in the Ardennes — the southeastern area of Belgium from which the immigrants came — and are invariably simple in design, encompassing a narrow altar set with religious statues, candles and always a statue of the Virgin Mary. Each was built for a specific purpose: in thanksgiving for a blessing received, or with the hope of divine intervention in the health and life of a loved one.

This article was adapted from a longer feature on the chapels written by Katie Lott in 2019.