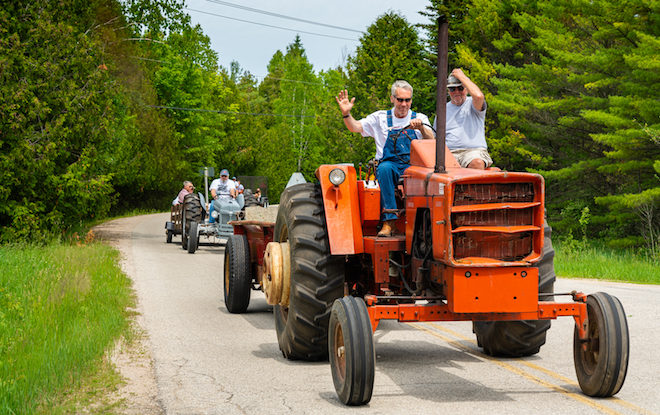 If you find yourself driving the backroads of Baileys Harbor sometime during the second week of June, you might find yourself stuck behind an odd traffic jam of tractors.

The long line is the annual Freddie K. B.S. Tractor Ride, Door County’s most informal parade to harvest memories and celebrate the life of one of the peninsula’s most revered characters: Freddie Kodanko, aka The Polka King.

The ride was the brainchild of Fuzzy Sunstrom, who owns Freddie’s Massey Ferguson 65 tractor.

Riding tractors symbolizes Freddie’s inability to drive a car due to “the sheriff’s boys” taking fault with his driving, as he told writer Norb Blei, when Blei interviewed the then-65-year-old Freddie for his book, Door Way. At that time, Freddie had gone 18 years without a driver’s license.

“You don’t need no license for no tractor,” Freddie told Blei, and then wondered aloud, “Think the sheriff’ll know about this?”

Freddie would drive his tractor to a baseball field, set up his amplified boom box and play polka music. The ride has also come to incorporate the memory of Sunstrom’s uncle Earlen “Butch” Seiler, a friend of Freddie who died in 2011. That’s when the B.S. was added to the Freddie K. Tractor Ride — at least officially.

What better way to celebrate local characters than by adding a little character of your own to the roads of the peninsula?