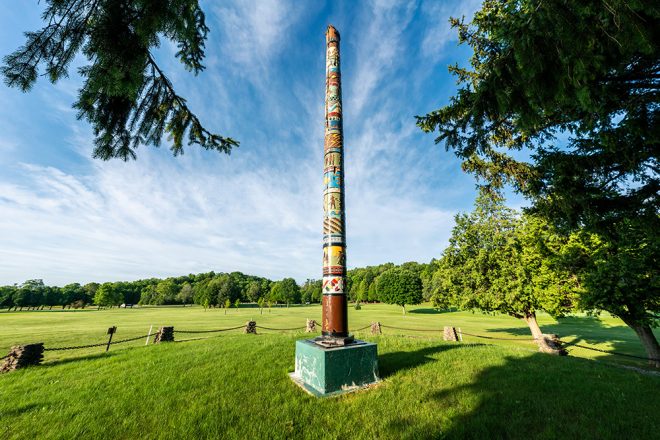 As you tee up on the ninth hole of the Peninsula Golf Course, the primary hazard in your vision isn’t a sand trap or a pond, but a 40-foot-tall pole and monument. Good golfers have no trouble avoiding it, but bad golfers will either be drawn into it or find themselves in the adjacent driving range trying to avoid it.

The pole has stood there for almost as long as the course has existed. The brainchild of Door County historian Hjalmar Holand, the pole was erected in 1927 to honor the Potawatomi tribe, some of the earliest inhabitants of the peninsula.

Holand proposed the design of 26 different scenes interspersed with Potawatomi symbols laid out in horizontal bands representing important segments of the tribe’s history. A Belgian artist named C.M. Lesaar carved the pole, and at the top, master carver Robert Petschneider placed a small bear, positioned to look over the Ephraim Harbor.

The pole was dedicated Aug. 14, 1927, during an elaborate program attended by 32 Potawatomi and thousands of others.

After the ceremony, Potawatomi Chief Simon Onanguisse Kahquados (1851-Nov. 27, 1930), the last descendant in a line of chiefs who ruled the tribe for several centuries, worked with the Door County Historical Society to arrange for his burial near the pole.

When Kahquados died near Blackwell, Wisconsin, he was living on just $10 per month in government assistance. But when he was interred beneath a nine-ton boulder near the pole on Memorial Day, 1931, the ceremony was attended by a crowd estimated at more than 10,000 people.

In 1970, the pole was replaced by a laminated pine replica created by Adlai Hardin. The new pole features an additional band designed by Chief Roy Oshkosh to honor the Menominee tribe.

When Peninsula Golf Course was looking for a new logo in 2000, it leaned on this history as well, adopting a design featuring the bear at the top of the totem.