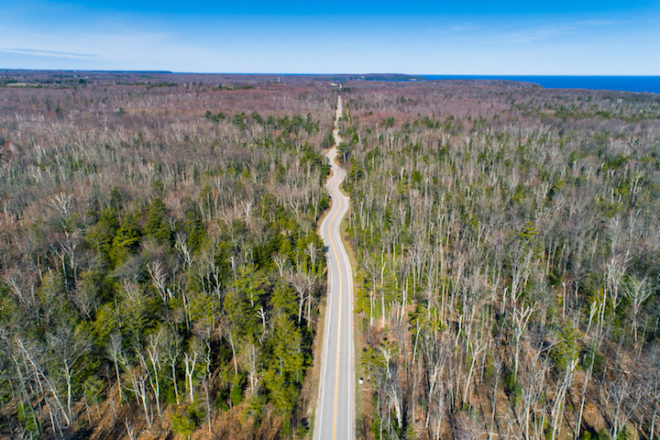 It might be the most-photographed road in Wisconsin: the end of Highway 42 at the tip of the peninsula that’s famous for its unnecessary curves as it causes drivers to serpentine on their way to the Northport ferry dock. It draws photographers in all seasons, and it begs the mind of every one of them to ask, why does it have all those curves?

One theory is that the curves were put there to weave around utility poles that once went down the center of the road. But the answer can more likely be traced to the county’s most famous landscaper, Jens Jensen.

The founder of The Clearing Folk School in Ellison Bay, the Danish-born Jensen was an influential landscape architect before he even set foot in Door County. His hands are all over the parks of Chicago, particularly Garfield Park and Humboldt Park. Jensen touted the power of nature to enrich people’s lives, particularly in urban environments, so his parks are famous for their water features, rock gardens and meandering paths that are meant to mimic and incorporate nature, rather than shape it.

Jensen once designed what he called the Ideal Highway: a thoroughfare that would slow traffic, keep nature always in view and include a separate pedestrian path. So it would make perfect sense for him to have designed a road to curve through the wilderness a few miles from his campus at The Clearing.

The road is designed to slow drivers and make them take in their surroundings, and decades after it was built, that goal has been achieved and then some: Many drivers are so awed that they pull over, actually get out of their car and take a picture.

How many stretches of pavement can inspire someone to do that?