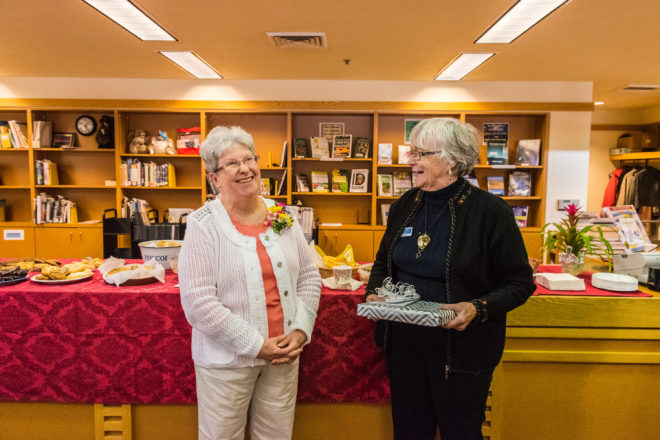 The heaviest shelves in the Sister Bay-Liberty Grove Library are found in the murder mystery and crime thriller section with authors such as Ian Rankin, John Harvey and Christopher Fowler. It’s no coincidence that this is the genre Betty Curzon, Branch Manager of the library, enjoys reading herself.

“I don’t think you can purchase materials without having it reflect your taste,” said Curzon, who retired on April 23 after 45 years in the Door County Library system, including the past 30 years in Sister Bay. Curzon has watched libraries evolve into the digital age while keeping a strong pulse on the public’s reading tastes.

“You have to be in tune with your community and your readers to be able to satisfy their tastes and their needs,” said Curzon. “There are many things here that I don’t read, authors like Catherine Coulter, Nora Roberts, but I know that type of thing would interest many people so I have to buy those.”

When Curzon started her career in the South Milwaukee Public Library in 1968, computer catalogues and barcodes were a thing for futuristic sci-fi novels. Even when she joined the Door County Library system, starting in Sturgeon Bay in 1971 and moving to the Baileys Harbor branch in 1972, the strong cooperation between the county branches didn’t make book exchanges any easier.

“We had staff meetings once a month down in Sturgeon Bay and, in the early years, we would have to bring big bags,” said Curzon, looking at her big blue canvas bag sitting on a chair in the corner of her office, full of hardcovers and paperbacks. “We pack them full of books and things we needed to exchange with other libraries and schlep them down to Sturgeon Bay and come back with full bags with other stuff.”

When the libraries integrated a catalogue and circulation system in 1995, the apprehension of opening your local book collection to the rest of the county gave way to better access and resources for everyone.

“Instead of having one copy of a bestseller just dedicated to your branch, you had maybe 50 from all the other branches,” said Curzon.

But each community still has its own customers and Curzon has developed a sense of what the Northern Door community wants to read while also watching those tastes change.

“The mystery thrillers, they fly off the shelf,” said Curzon. “The James Patterson books and John Grisham’s, and not too many years ago these authors were not even around. The romantic suspense and romance books, they have fallen out of favor.”

Curzon has also found a greater interest in political works from the left and right, while the advent of the Internet has left expensive resource texts such as encyclopedias and atlases off of the purchase list.

There are few people who work in or visit the library that are not avid readers, and Curzon will miss that atmosphere of intellectuals most.

“Just being in daily contact with one of your addictions, I suppose you could call it, with books and talking to other people and listening to what they think about certain authors or titles, it is very satisfying,” said Curzon.

The cadence of her voice picks up as she describes the British murder mysteries and police procedural novels that will be at the top of her reading list once she has some more free time.

“They’re not as in-your-face violent as some of the American authors,” said Curzon. “Little old ladies like me don’t want to read about all this bloody, gory stuff.”

Between books, she will reacquaint herself with the piano, tend to her garden and drop in on the library to talk about books in the stacks of shelves that she helped build over the past 30 years.