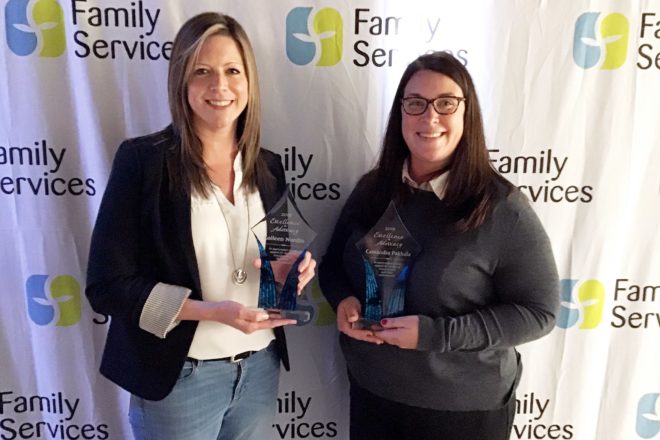 Each year in April, Family Services’ Sexual Assault Center and the Willow Tree Cornerstone Child Advocacy Center recognize those in the community who are making a significant difference in the lives of victims of sexual assault or child maltreatment.

This year the recipients of the Excellence in Advocacy Award are Detective Cassie Pakkala of the Green Bay Police Department and Door County District Attorney Colleen Nordin. Both demonstrate trauma-informed care while working with victims, and both are dedicated to making their communities safer places to live.

Nordin works closely with community agencies to support victims inside and outside the courtroom, bringing her expertise, dedication and diligence to every case, and handling sexual-assault cases with extra empathy and passion to fight and win for those victims.

Nordin understands the effects of trauma on sexual-assault victims and how their power and control were stolen from them during the assault. As a result, she fiercely prosecutes sexual-assault cases to hold the perpetrators accountable and seek justice for the victims. She encourages victim input throughout the court process to return control to the victim.

Nordin goes well beyond what is expected from a district attorney. For example, she participates in community events, educational presentations and prevention education throughout the county. April was Sexual Assault Awareness Month, during which she was a panelist for “Unheard Voices,” a prevention-education program about sexual assault. Nordin takes time to answer questions from the students, thus helping to educate future generations about sexual assault and its impact on the victims and the community.