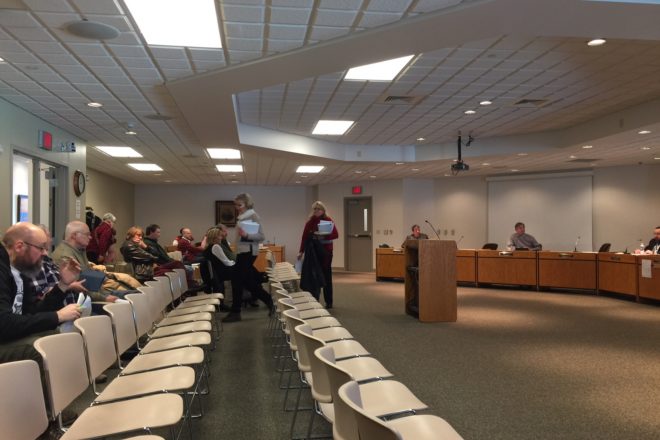 Door County District Attorney Colleen Nordin sent a letter to three Sturgeon Bay alderwomen saying that she won’t take action regarding a complaint that the council members violated open meetings law when they refused to attend special meetings of the Common Council in November.

Nordin wrote that she believes the collective actions of the three women “do indeed rise to the level of violation of Wisconsin Open Meetings law, I have further determined that my office will take no further action with respect to the complaint.”

In November, Mayor Thad Birmingham called repeated special meetings to vote to raze the Teweles and Brandeis Grain Elevator on the city’s west waterfront. Alderwomen Laurel Hauser, Kelly Catarozoli, and Barbara Allmann each said they could not attend, meaning the council would not have a quorum and could not vote. When the agenda item came up at regular council meetings, the three walked out of the meeting.

The complaint was brought by Robert Loss Jan. 10. “I believe that Council member Barbara Allmann; Laurel Hauser; Kelly Catarozoli have violated portions of Wisconsin Open Meeting laws,” Loss wrote. “I offer that the fact that they have refused to attend properly and legally called Special Common Council meetings, the most recent being January 8, 2018. Secondly their joint public statement which is attached is clearly an example of a Walking Quorum as well as a Negative Quorum.”

Open Meetings Law violations can result in a fine of up to $300 per violation.

Catarozoli denied that the three council members coordinated their actions. She said she responded to the last-minute calls for special meetings, which were called for noon on weekdays, by informing City Administrator Josh VanLieshout that she could not attend. Unlike normal special meetings, she said nobody checked with council members to see if they could attend before setting a meeting time.

“I made it clear to the administrator that I’m not going to these meetings until we take care of legal issues that were pending,” Catarozoli said. “I didn’t want to get us into another legal issue.”

As for the joint statement, Catarozoli said the alderwomen felt it was important to inform the public of the reasons for their actions.

“There were things that weren’t being addressed and we felt that was important,” she said. “That statement was the only thing we collaborated on.”

What is a Quorum?

From the Wisconsin Department of Justice:

A “walking quorum” is a series of gatherings among separate groups of members of a governmental body, each less than quorum size, who agree, tacitly or explicitly, to act uniformly in sufficient number to reach a quorum. A walking quorum may produce a predetermined outcome and thus render a publicly-held meeting a mere formality. The Wisconsin Supreme Court has commented that any attempt to avoid the appearance of a meeting through the use of a walking quorum is subject to prosecution under the open meetings law. Furthermore, the requirements of the open meetings law cannot be circumvented by using an agent or surrogate to poll the members of governmental bodies through a series of individual contacts. The series of gatherings need not be face-to-face. For example, phone calls, email exchanges, and other electronic messaging may suffice.

The essential feature of a “walking quorum” is the element of agreement among members of a body to act uniformly in sufficient numbers to reach a quorum. Where there is no such tacit or express agreement, exchanges among separate groups of members may take place without violating the open meetings law. Thus, the signing, by members of a body, of a document asking that a subject be placed on the agenda of an upcoming meeting likely does not constitute a “walking quorum” where the signers have not engaged in substantive discussion or agreed on a uniform course of action regarding the proposed subject. In contrast, where a majority of members of a body sign a document that expressly commits them to a future course of action, a court could find a walking quorum violation.

Walking quorum issues are complex and fact specific. If a member of a governmental body or a citizen has questions or concerns regarding a possible walking quorum, they should consult with their legal counsel.