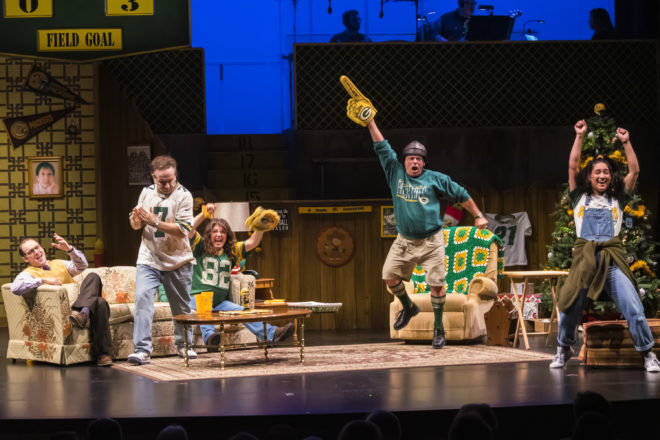 I don’t like sports. I like theatre. Seeing theatre about sports is weird for me, but I was very excited to take in a show at Northern Sky’s brand-new, indoor Gould Theater. And, despite my initial reservations as a Minnesota-born Wisconsin transplant about seeing a show based on Packer fanatics – and my Minnesota heritage was crucial to my viewing of the performance, but I’ll say more about that later – Dad’s Season Tickets absolutely thrilled me by its finale.

I have a background in theatre, so I’m critical of every show I see. I can’t help it. Luckily, it doesn’t take much to lower my guard and immerse me in a production. I’m a sucker for effort and honesty, and the small ensemble cast of Dad’s Season Tickets really lays on the charm.

The best farces feature honest characters. Absurd, yes, but honest, and each member of the Kosinski family is portrayed skillfully in a way that is at times completely off the wall, but the portrayals are always rooted in sincerity as the characters try to become the heir to Dad’s season tickets – you know, like the name of the show? I’m told those are a big deal for Packer fans.

Matt Zembrowski’s music was incredibly fun and varied throughout, with numbers bouncing around among a lot of genres. The melodies were simple, which made them all the more catchy, but Zembrowski has an ear for harmony that adds a lot of flavor to each piece, and each was executed wonderfully by a cast with some major pipes.

I was really thrilled by Northern Sky’s new indoor home base, the Gould Theater, and how it provides a venue that’s totally modern, yet brings the outdoors inside in a way that makes it seem rustic and as though it belongs. The new theater affords Northern Sky plenty of new and exciting technical opportunities – in this case, using a fully loaded lighting grid to break the set into different worlds as the characters moved from their homes to Lambeau Field and back again. The ramps leading off stage are built seamlessly into the proscenium, which extends the already ample playing space quite far to the sides.

Remember how I said I was Minnesota born? Well, I grew up around Vikings fans, and let me just say that the rivalry between the Vikings and the Packers is a much bigger deal in Cheese Country than it is in the Land of 10,000 Lakes. One of the characters in Dad’s Season Tickets is a secret Vikings fan (I won’t say who though it’s pretty obvious from the individual’s first appearance on stage), and though this person is the butt of many jokes throughout, the musical number that brings this individual’s Vikings fandom to a climax in the second act steals the show.

Dad’s Season Tickets is a charming story about family. Yeah, it’s about the Packers in a lot of ways, and if you find yourself saying, “Go, Pack!” instead of “Goodbye” every football season, you’re going to be rolling the entire show. If you’re more tempered in your love of football, or, God forbid, not a sports fan at all (like me, but don’t tell anyone because this is Packer Land), absolutely still take in a production of Dad’s Season Tickets. The energy on stage is contagious.

Purchase tickets at northernskytheater.com or by calling 920.854.6117. Northern Sky’s Gould Theater is located at 9058 Cty A in Fish Creek.