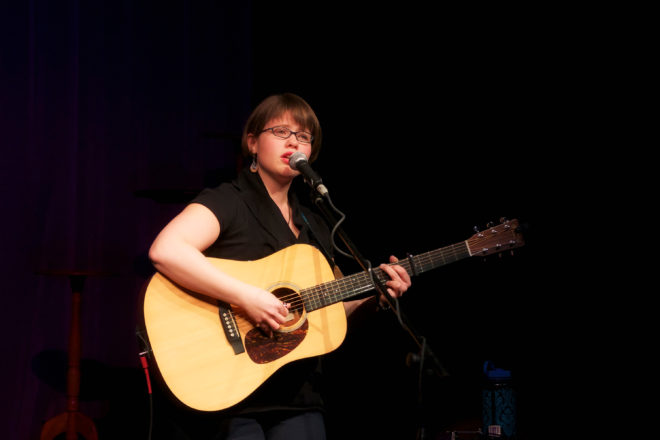 Grimm is an actor and songwriter whose work has taken him around the world, including parts in films like Clear and Present Danger and the NBC drama Reasonable Doubts. Grimm’s songs – rich with descriptive details, sung with warmth and intimacy – are full of the rural rumblings that have shaped his life, exploring America’s national romance with the idea of the family farm and the vanishing landscape of rural America. In 2016, Grimm’s song “Woody’s Landlord” was the number-one song on the national folk radio charts.

Known for the literate candor of her songs and the easy humor of her live performances, Dahl has four studio albums to her credit. In October 2017, her album Solid Ground hit number 15 on the national folk radio charts.

Brooks, originally from King City, Ontario, Canada, is a singer-songwriter best known for his rich, rough voice and compelling guitar work. In years of writing and touring, Brooks has earned worldwide accolades, including four nominations for Songwriter of the Year at the Canadian Folk Music Awards.

Tickets are $15 and are available first-come, first-served the night of the performance. Doors open at 6:30 pm. TAP is located at 239 N Third Ave. in Sturgeon Bay.