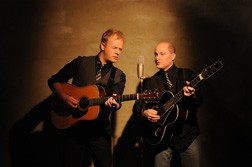 Daily & Vincent will take the stage at the Peg Egan Performing Art Center’s Sunset Concert Series on July 29 at 7 pm.

Jamie Dailey (guitar, bass, lead and harmony vocals) joined the Doyle Lawson & Quicksilver band in 1998 as lead, baritone and tenor singer and bass player. During Dailey’s tenure the band won 13 IBMA Awards including Vocal Group of the Year from 2001 – 2007 and Song of the Year for “Blue Train,” which earned four Grammy® and five Dove Award nominations.

Dailey has recorded with Dolly Parton and Rhonda Vincent, and was a guest on Ricky Skaggs’ Grammy-winning Brand New Strings album.

Darrin Vincent (mandolin, bass, guitar, lead and harmony vocals) has been a member of Ricky Skaggs and Kentucky Thunder for the past ten years. With this group, he won five Grammy Awards and eight IBMA Awards for Instrumental Group of the Year. He also earned three Grammy nominations for co-producing Rhonda Vincent’s One Step Ahead, Ragin’ Live and All American Bluegrass Girl.

Vincent also performed on Grammy-winning albums by Dolly Parton (The Grass is Blue) and Jimmy Sturr (Top of the World).

The Daily and Vincent concert is free and open to the public; it will also serve as a tribute to the late Marion Hislop.

The Peg Egan Center is located on Church Street in Egg Harbor, and in case of rain, concerts are held at the Calvary Methodist Church located at 4650 County Road E in Egg Harbor.