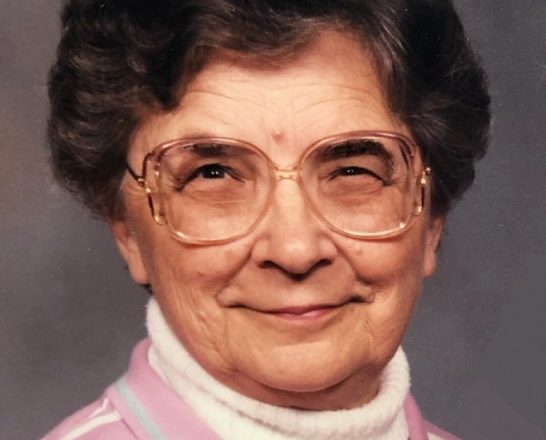 She was born in Sturgeon Bay, the daughter of the late Olaves Marcellius and Hulda Maria Victoria (Peterson) Anderson. Daisy graduated as the valedictorian of her 1947 Sturgeon Bay High School class. She went on to receive degrees in physical education and biology at St. Olaf College before completing her studies and graduating from the University of Illinois with her degree in library science.

Daisy met Robert O. Lewis while working in the cherry-processing plant in 1946. After she finished her studies at St. Olaf college, she and Bob were married December 27, 1950, in Sturgeon Bay. They resided in the Norwegian part of Chicago’s northeast side and started their family there.

The family would relocate to Moline, Illinois, where Bob worked for the defense department at Rock Island Arsenal, Moline. After her children were grown, Daisy worked seven years as the children’s librarian for Moline, where she started the library aide program. In 1980, she and Bob moved back to Sturgeon Bay, and in 1981, she was instrumental in the opening and development of the Forestville library and its summer reading programs.

Daisy’s greatest joys in life revolved around her family time with her children, grandchildren and great-grandchildren. This family theme was always a part of her life as her parents had 21 siblings, giving her 40 first cousins. She and Bob were staunch supporters of our country’s veterans and the Wounded Warriors Project.

They enjoyed traveling together, exploring our country and started camping in 1960 with their Moline friends, and eventually the Northeast Wisconsin Bayland Coachmen. Their travels would see them introduced to Elderhostels and working on various archeology dig sites. Bob preceded her in death on February 11, 2010.

Daisy was a member of Bay View Lutheran Church in Sturgeon Bay and an active member with the Ladies Rebecca Circle of the church as well as teaching Sunday School. She was a member of the Friends of Door County Library, the Wisconsin Genealogy Society, Sons of Norway, NARFE. She volunteered her time to help children read and at Neighbor to Neighbor and on the Help Line.

Preceding her in death were her parents, Olaves and Hulda Anderson; husband, Robert O. Lewis; brother, Charles A. Anderson; and sister-in-law, Dorothy Miller.

Funeral services will be held at 11 am on Saturday, Feb. 23, at Bay View Lutheran Church. Burial will be at Hainesville Cemetery.

Friends may call from 4 to 8 pm Friday, Feb. 22, at Huehns Funeral Home and on Saturday at the church from 9:30 am until the time of the service at 11 am.

Memorials may be made in her memory for the Wounded Warriors Project.

Expressions of sympathy, memories and photos of Daisy can be shared with her family through her tribute page at huehnsfuneralhome.com.