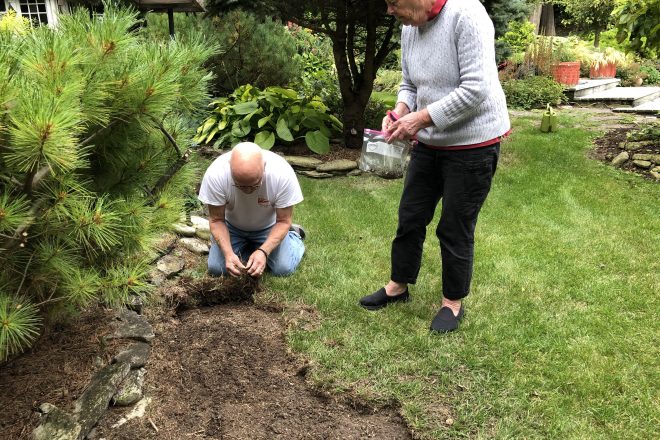 Doug Henderson pulls back dying sod and finds nonnative jumping worms that are destroying the roots. The caretaker of elegant gardens, along with his wife, Barb, tested for the invasive species in 2020 and found none, but they found them in late summer this year in several locations. Photo by Craig Sterrett.

“It’s horrifying,” Barb said, because the discovery this year of invasive jumping worms in many portions of their Bay Shore Drive property – just a year after testing for them and finding none – means the worms have surely arrived elsewhere in Door County as well and are damaging gardens, lawns, forests and the ecosystem as a whole.

Door County residents are just now beginning to discover the invasive worms, which look a little like a night crawler, but are darker and firmer and have a white band (clitellum) instead of a pinkish band. Jumping worms die each winter, but the species survives by leaving poppy-seed-sized cocoons under leaf litter, in mulch and in the soil below the sod roots they destroy, according to the Wisconsin Department of Natural Resources (DNR).

The Hendersons figure that if they’re finding the worms on their property – and they were careful about any dirt or plants they brought in – they’re probably all over the county.

“We want people to be alerted and know that they’re here in Door County,” Doug said.

“Jumping worms are a relatively new invasive species, first identified in Wisconsin in 2013,” said DCIST leader Samantha Koyen. She urges residents to look for the invasive worm and to make efforts to avoid spreading it in soil or its cocoons on shoes, tires, walking sticks and tools.

Prevention Is the Best Solution
“Jumping worms pose a huge threat to Door County’s ecology because of their detrimental long-term impacts to soil and native vegetation,” said Jesse Koyen, Door County Land Trust’s land stewardship director. “Just about any landscape you can imagine is susceptible to jumping worms: backyard gardens, open fields, forests and other natural areas. Prevention is our best solution.”

And essential to prevention are less movement and more cleaning. That means not moving any soil, water or plant matter where known invasives live, and cleaning all equipment when moving between sites, including shoe treads, debris from pets, shovels and walking sticks. Bare-root and native plants should be purchased from reputable sources.

DCIST’s Koyen said routine fall activities can spread a variety of invasive species. These routine-but-risky tasks include dividing and sharing perennial plants and hauling yard waste to compost sites that are then fed to plants and gardens in the spring.

Signs the Pest Is Present

Signs of the worms include dying patches of turf and dry, coffee-ground-like granules of soil under leaf litter and mulch. The worms’ castings, unlike those of the European worms that have been here for centuries, are dry.

Jumping worms also change the makeup of the top layer of topsoil to a dry, granular material, and hidden among those grains in the topsoil are the jumping worms’ cocoons.

Bernie Williams, a Wisconsin DNR invasive-species and earthworm specialist, said Door County has more susceptibility to the spread of the worm than other areas because many people with vacation homes could transfer plants in soil from southern Wisconsin, Milwaukee, Illinois or other areas. Construction projects also contribute to moving infested soil into the county.

Wisconsin passed regulations to prevent the spread of the worms in 2009, four years before their discovery in the state. Nurseries and soil providers must pass inspections, and it’s illegal to sell jumping worms as bait.

As with many invasive species, these worms have no natural predators here. Scientists have anecdotal evidence that robins are not eating jumping worms and may not find them palatable. However, the DNR has received reports of turkeys and chickens eating them.

Williams said Wisconsin residents typically start reporting jumping worms in late August and September, when more of them are mature and easy to see. Rainier summers produce more of the worms, and frost kills them, but not their cocoons. The worms are asexual and thus are able to prolifically produce cocoons without a mate.

“The cocoons can be killed only if heated above 104 degrees,” Koyen said. “Jumping worms live in colonies and spread quickly. It has been documented that jumping worms can infest up to 17 acres in one season, unlike the European earthworms, which move approximately 30 feet a year.”

The DNR has concerns that jumping worms may wreak havoc on the forest. They loosen and degrade the soil, and they also speed up the nitrogen cycle, which prevents plant matter from decaying over time and providing the nutrients the trees need, Williams said.

In addition to spreading the word about the worm, the Hendersons are taking preventive actions of their own. They’re replacing the bluegrass trails that wound through their gardens with rock, as well as tearing out sedum groundcover along their driveway and replacing it with stones. They’re also making efforts to avoid standing on soil, instead hopping from stepping stone to stepping stone. And, when they leave their lawn, woodland or gardens and step onto their driveway, they spray the soles of their shoes with bleach-based kitchen cleaner.