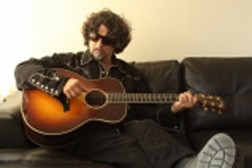 Dan Navarro will play at Lost Moth Gallery on Feb. 7 at 7 pm. For more than 30 years, Dan Navarro has written, sung, played and acted his way through a rich and varied career.   He started his career as a songwriter, often with Eric Lowen, for artists as diverse as Pat Benatar (the Grammy-nominated “We Belong”), The Bangles and Jackson Browne.

In the ‘90s, he recorded and toured with Lowen in the acoustic duo Lowen & Navarro until Eric’s retirement in 2009. After 22 years and 12 albums with Lowen & Navarro, he released Live at McCabes in 2009 and is finishing up work on his first studio album of new material, Shed My Skin. Navarro has since transitioned into a growing solo career, increasingly in demand on the national concert circuit.

When not on the road, Navarro is a voice actor in major motion pictures such as Happy Feet, The Lorax and Ice Age; in numerous television series, currently on Family Guy; and hundreds of national commercials.