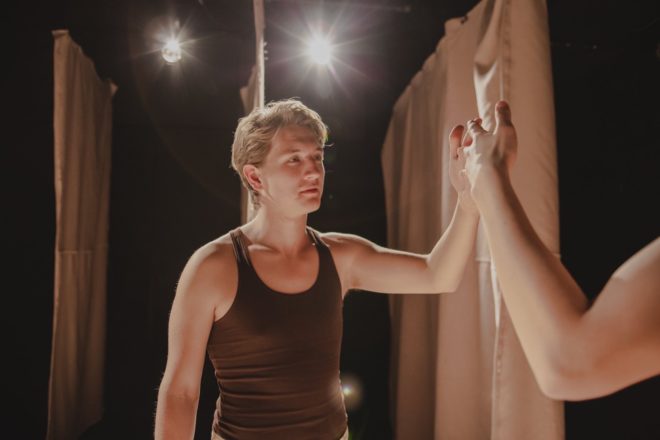 Spetz performs in Tell Me How It Ends, a devised dance project directed by Maya Quetzali through NYU’s Tisch School of the Arts and Playwrights Horizons in New York. Photo by Julianna McGuirl.

When Isaiah Spetz fulfilled his dream of moving to New York City, he wasn’t prepared to hate it. But, after growing up in Sturgeon Bay and  spending lots of time at Fellner Orchards – his grandparents’ apple orchard – he missed the green space. Now that he’s lived in a Big Apple place of a very different kind for a few years, though, and has found out where the good green spots are, New York City is starting to feel more like home.

“It was a bigger culture shock than I had expected,” Spetz said. “I just don’t like the concrete.”

Spetz participated in many activities while at Sevastopol High School – baseball, football, forensics, Student Council – but upon graduating in 2017, he decided that theater was his passion.

His interest started while taking classes and performing at Third Avenue Playhouse (TAP) with Stage Kids during middle school. Between middle school and high school, Spetz kept busy by performing in six shows a year and last summer acted as a production intern and performer at Northern Sky Theater.

“I was able to take advantage of the professionals and the wonderful people who live here in the county and work,” Spetz said.

One of his biggest inspirations is Amy Ensign of Door Shakespeare. She started directing the shows at Sevastopol while Spetz was in high school, and they still keep in touch today. He credits her for keeping his passion for theater alive.

Spetz met Bob Boles and James Valcq, co-artistic directors at TAP, when he was 14. They had just moved here, so Spetz got to witness and assist with the studio theater as it was being built. They’ve been guides, role models and teachers to him throughout the years.

And Spetz said that Neen Rock, Northern Sky’s stage manager, is the most inspirational person he knows.

“It’s not a sports team, but she’s the best coach,” he said.

Now Spetz is at New York University’s Tisch School of the Arts to study musical theater and pursue his bachelor of fine arts degree in drama.

“I do a lot of dancing and a lot of singing,” Spetz said.

He spends three days a week going to class from 9 am to 6 pm, studying the arts from acting and jazz dance to tap dancing and speech classes. He also takes ballet – a style he didn’t particularly enjoy at first but encourages everyone to try. The other days are spent taking academic classes.

“I really like dialect classes and learning how to use speech articulators to manipulate your sounds and the way we speak,” Spetz said.

He recently worked on a devised dance piece, in which it’s up to the performers to create the routine.

“There’s a lot of group team-building and getting to know each other and learning how our bodies move,” he said, “and listening to what kind of story our bodies want to tell. We ended up focusing on cycles of oppression.”

Spetz plans to graduate in three and a half years, which means he’ll be finished by this time next year. Then he plans to stay in New York for a year or two while he navigates the audition process and looks for an agent.

Although Broadway is an aspiration for many young actors, Spetz knows that theater spans far and wide. He’s also interested in film and writing and may explore screenwriting or commercial work. In the meantime, he’s been cast in Cabaret, a musical drama set in Berlin during the Nazi rise to power.

There are a lot of avenues for Spetz to explore in the future. No matter what he chooses, his goals are to be brave, to do what he loves and to find joy in the things that aren’t always fun – and he offers that same advice to upcoming grads.