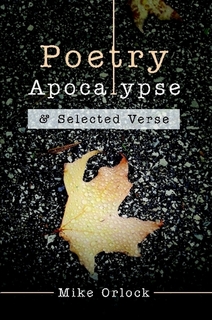 When Sturgeon Bay poet Mike Orlock gets into a string of words, he flips them around, watches them twist the air, then slings a period into an idea that somehow is not quite expected. He has just released a new book, Poetry Apocalypse & Selected Verse, which is a companion to his first volume, You Can Get Here From There: Poems of Door County & Other Places. Through them, Door County ought to feel celebrated.

In You Can Get Here From There, Orlock, a former Chicago-area high school English teacher, offers a series of poems such as “About Door County” and “About Sturgeon Bay” that capture the spirit of his chosen retirement home.

“All this is Door County,” he writes, “thumbing a ride to paradise in the too blue water / of Lake Michigan to the North Pole, / dressed to seduce even the most skeptical among us …”

In “Likely Story,” a poem from Poetry Apocalypse, he tells us that “In my younger and more vulnerable life, / I dreamed of being F. Scott Fitzgerald. / Not the F. Scott of later years, drinking himself to dissipation … I wanted to be the F. Scott / of Gatsby, bold and beautiful.” Fitzgerald’s most famous novel was The Great Gatsby: one of the great works of American literature and one, to paraphrase the famous author, that defined how the rich are different from the rest of us.

The scope of Orlock’s love for Door County and his grasp of great literature – taught to generations of his students – is what makes these two books worth a trip to a local bookstore to put them on your bookshelves. Door County, as in other ways, is blessed with a stable of gifted poets and writers, and Orlock glints with the verve of sunshine catching ripples on early-morning bay waters. He helps to make this area a special place for the creative arts.

In his first published books, he achieves what he’s after. In addition, he achieves it with a rare craftsmanship that’s missing from much of today’s academic poetry. He can write a sonnet or a free-verse poem with the surety of Edna St. Vincent Millay or Carl Sandburg.

Plus, his poems really are accessible. A high school junior can sit down with one and not have to puzzle out what Orlock is trying to achieve. On more than one occasion, he also accomplishes what Robert Frost advised to poets to do: begin a poem with delight and end it with wisdom.

Orlock had a writing career before he and his wife, Liz, moved to Sturgeon Bay. He wrote film reviews for Reporter Progress newspapers in Chicago and earned publication and awards for short stories in some prestigious publications.

He did not become a poet, however, until he moved to Sturgeon Bay and took a writing class from David Clowers at Northeast Wisconsin Technical College’s Sturgeon Bay campus. From that beginning, he received both the Jade Ring Award from the Wisconsin Writers Association and the Muse Award from the Wisconsin Fellowship of Poets. He has also developed two volumes of poems that should delight anyone who can chuckle a little or imagine words flying up in the air, twirling around and becoming a poem on a page.

You Can Get Here From There and Poetry Apocalypse are available at OtherWorlds Books & More, 41 N. 3rd Ave. in Sturgeon Bay.

Thomas Davis as an educator, environmentalist and writer who recently published the historical novel In the Unsettled Homeland of Dreams. He has been the president or chief academic officer of five tribal colleges and universities in the U.S. As a member of the tribal college movement, he helped to found the World Indigenous Higher Education Consortium.