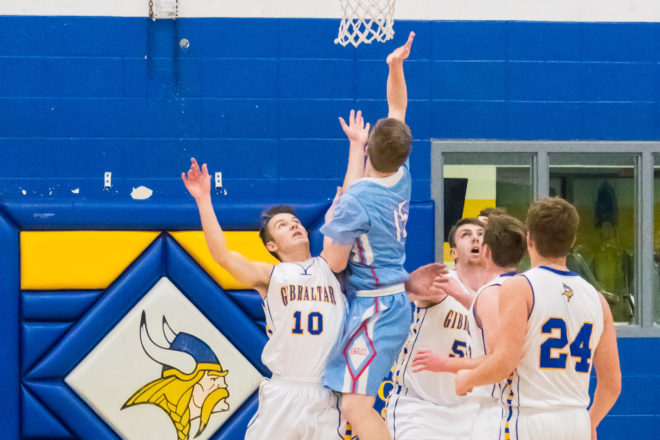 Kyle Daoust drives against Gibraltar in a 2017 game at Gibraltar High School. Photo by Len Villano.

Southern Door’s Nick LeCaptain held the previous record with a 50-point effort in a win over Oconto in 2016.

“One shot led to another,” Daoust said. “I started with a few easy looks and I kept getting hotter after that.”

Daoust scored 21 points in the first 10 minutes of the game and had 38 points at halftime. He scored on a 10-foot jump shot late in the game to eclipse LeCaptain’s mark. Daoust finished with 14 2-point field goals, five three pointers and shot 8 of 10 from the free throw line.

“Daoust’s performance last night was unbelievable,” teammate Derik LeCaptain said. “To be able to see and be a part of it was amazing. When he gets into his groove there really is no stopping him. It’s awesome that I was able to play with my brother who scored 50 and one of my best friends who now has the record at 51.”

Nick LeCaptain, who now plays basketball at St. Norbert College, said he was was pleased that a friend broke his record.

“Kyle has been one of my best friends since I was five,” he said. “I’m just happy that a player of his caliber would break this record. It’s pretty cool to be the only two guys ever with 50 points coming from the same school who played on the same team for two years.”

Editor’s Note: This story has been updated to correct Kyle Daoust’s career scoring total, which was originally listed as 1,426. It has been corrected to 1,472.