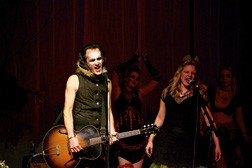 This year marks the 5th annual Dark Songs songwriting event held at The Holiday Music Motel in downtown Sturgeon Bay. Songwriters converge upon the motel for a full week to write and record new original collaborative material in the spirit of the “dark” holidays of late autumn – Halloween and Día de Muertos (Day of The Dead).

“This year, the whole motel will be used to house the writers and we’ll have three studios in operation throughout the week,” said melaniejane motel manager and co-organizer.

pat mAcdonald, founder and creative director, is currently hard at work selecting songs for this year’s release of Dark Songs From The Holiday (the 4th volume released).

This past August, the Holiday Music Motel and Steel Bridge Songfest family suffered a great loss when Billy Triplett (in-house engineer) passed away suddenly and unexpectedly. The entire event will be dedicated to celebrating Billy and his many contributions to the music community.

For more information and to see a complete list of participating songwriters visit HolidayMusicMotel.com/DarkSongs.

Check next week’s issue of the Peninsula Pulse for a feature article about Dark Songs.