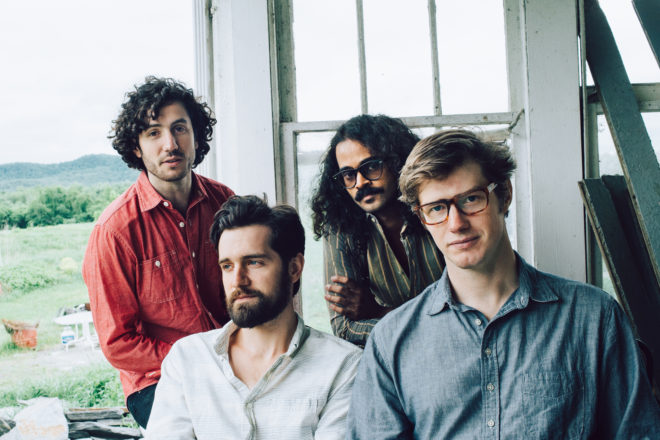 Have you ever wondered what life would be like in the far future? Some would say it looks pretty bleak considering the state of things, and some would say perhaps there’s a glimmer of hope. What if you were granted extra lives to navigate those murky waters?

Well, Boston indie folk band Darlingside addresses all those sentiments on their new album, Extralife, which they’re going on tour for this summer.

One of those stops will be here in Door County, July 10 at the Door Community Auditorium. The Pulse talked with Auyon Mukharji, violin and mandolin player for the band, about their album and tour.

Darlingside is made up of three others, Don Mitchell on guitar and banjo, Harris Paseltiner on cello and guitar and David Senft, on kick drum, bass and guitar. The quartet has been making waves lately with the album’s arrival, which came out in February of this year.

There are a few ways these guys are breaking tradition — they group around only one mic, they don’t have drums and they’ve mixed electronic and acoustic together. These are the reasons why their previous album, Birds Say, reached critical acclaim. They made these choices to better reflect their rehearsal and writing process.

Grouping around one mic also makes it easier for them to master the harmonies they employee in their music. Their voices are perhaps the most heavy element to their sound, and being able to blend their voices before it hits the microphone is key, Mukharji said. Plus, it makes their live show more intimate.

Extralife carries all those same techniques, but perhaps goes even further in their songwriting abilities. Birds Say was more of a collection of memories about the past, their respective childhoods. Extralife, though, is a look ahead, and their songwriting is at its most evolved point.

“We were all getting in on the ground floor for all those lyrics,” Mukharji said. “We were further in each other’s heads.”

No one member spearheads the process. That reflects their dynamic as a band — there is no frontman. The band operates in a way where each member is equal, and that’s something they value.

“Being a band of equals is the only thing that makes sense to us,” Mukharji said. “People ask what it’s like to be in a band, and my answer is that it’s similar to asking what it’s like being in a family?”
So, did they intend to write an album about dystopian futures, uncertainty or hope? No, it wasn’t intentional, Mukharji said, rather it was a result of the group spending so much time together and dwelling in the same sort of headspaces.

“It’s a lot of stuff that we were thinking about and talking to each other about,” Mukharji said.

Well, Darlingside is taking this new album in tow and heading on the road, sharing bills with big names such as Brandi Carlile, Dawes and Father John Misty. They’re even heading to Germany to tour. They’re excited to experience and be charmed by new places, Mukharji said, and Door County has a fair chance of doing so.

Darlingside plays July 10, 8 pm at Door Community Auditorium in Fish Creek. Tickets range from $29 to $48. Advance reservations are recommended and can be made through the DCA box office, located at 3926 Hwy 42 in Fish Creek. The box office is open 12-5 pm Monday through Friday. Tickets can be purchased in person, by calling 920.868.2728 or online at dcauditorium.org.