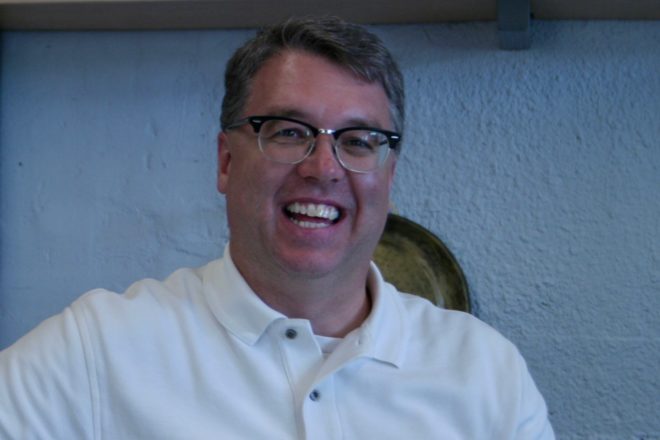 Brad Pfaff, the Secretary-designee of the Wisconsin Department of Agriculture, Trade and Consumer Protection (DATCP), stopped by the Peninsula Pulse office Tuesday after speaking at the Wisconsin Dairy Products Association’s 2019 Dairy Symposium, held at the Landmark Resort.

Pfaff grew up as a farm kid surrounded by other farm kids in western Wisconsin, where his parents still farm today.

Although Pfaff does not farm, he comes from five generations of farmers. “My dad’s side, all the way back, they farmed. My mom’s side, all the way back, they farmed,” he said. “I can’t say enough how appreciative I am that Gov. Evers has given me this opportunity. Agriculture, rural communities, rural people – that’s who I am. To me it’s more than prices and economies of scale. It’s our heritage; it’s our culture; it’s our values.”

According to the USDA, U.S. farm debt has risen to $409 billion, a level not seen since the 1980s, when a glut of farm commodities combined with a U.S. export decline led to a dramatic rise in farm foreclosures, making it the grimmest time for farming since the Great Depression, although things are looking pretty grim now for Wisconsin farmers.

Wisconsin had the dubious distinction in 2018 of leading the nation in farm bankruptcies with 49 (Kansas was next with 35). The state has also seen a 49 percent decline in the number of dairy farms during the past 15 years.

“It has been terrible,” Pfaff said about the economic bind farmers have found themselves in. “The last four to five years, in all agriculture – but particularly dairy – it has been less than profitable. So what do we do? What can we do for markets?”

Pfaff points to recent grants from the Wisconsin Economic Development Corporation and Dairy Farmers of Wisconsin (formerly the Milk Marketing Board) to the Center for Dairy Research to create the Beverage Innovation Center, which is charged with finding new uses for fluid milk. Its first project will be creating dairy beverages that don’t need refrigeration as an attempt to compete with nondairy beverages that don’t require refrigeration until they’re opened.

“We grow far more than we can ever eat ourselves. We need to find markets for our product,” Pfaff said. “We’re a protein-rich state. People are moving to Western-style diets, and we’ve got the protein.”

He mentioned that several weeks ago, a trade-mission group was in the state from the Middle East, with 15 people from 11 different companies and four countries.

The tariff war with China has contributed to added stress on farmers.

“The Chinese should have been held accountable for stealing intellectual property, but I scratch my head: Why are family farmers having to pay for it?” Pfaff said. “I know the USDA is providing some financial aid. Farmers I know would much rather get their money from the marketplace than the government. ‘Trade, not aid’: I hear that a lot.”

As Pfaff’s title states, the department he heads is also responsible for consumer protection.

“One thing I hear, regardless of where I go: ‘Let’s talk about what’s going on with consumer protection,’” Pfaff said. “I am hoping to raise greater attention to the fact that we need to do more to protect our consumers when it comes to data security, financial security, making sure consumer protections are there, making sure we have resources to be constantly vigilant [about] what’s happening.”

With the broad scope of issues that DATCP deals with, Pfaff said he plans to be a good listener so that his department can provide the best service for its constituents.

“I think of what my mother once said: you have two ears and one mouth for a reason,” he said.

Pfaff provided a business card but pointed out, “It says ‘Secretary’ on the card, but I’m still a designee. None of us have been confirmed. I’m not aware that this has ever happened for this length of time. I just go to work every single day and try to do my very best.”