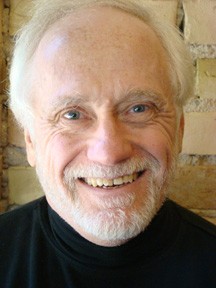 “I feel as though I’m back to where I’m supposed to be,” poet David Clowers said. “From when I was a kid here. I’ve intersected with my dreams, living where I wanted to be.”

As a boy Clowers came with his parents from their home in greater Milwaukee to Peninsula State Park for a camping trip. “I fell in love with the area!” he said.

He and his wife bought 30 acres of land on Lost Lake Road in Door County and built a 12 by 16-foot cabin with a sleeping loft as a weekend getaway. The winterized building had a wood stove and a well, but neither electricity nor plumbing.

The Jacksonport property became his primary residence in 2001 after the marriage ended and his wife received the city home in the divorce settlement. From that time until 2010, he lived “off the grid,” partially from necessity, but also as an experiment in living simply, much like Thoreau’s Walden Pond adventure.

“I’ve been a Quaker since college,” Clowers said, “and joined the Religious Society of Friends. This was an exercise in true simplicity.”

Was it a good experience? “Very much so,” he said. “I did it as long as I wanted to.” And like Thoreau, he took breaks, sometimes staying at a motel if the weather was too severe. However, his venture “was three times as long” as Thoreau’s, he said, “and more primitive.”

Lawyer friends had invited Clowers to come to Door County to take over the Legal Aid Clinic, and later offered him their legal practice as well. He continues to work as an attorney, and while he has been a writer all of his life, “for the last 10 years I have been writing seriously,” he said.

Although his work as an attorney is left brain, and his life as a poet, right brain, occasionally the two intersect, as in his poem that begins “When the judge said, / ‘Will the defendant please rise,’ / this morning, for some reason / I thought of bread;” or as in his poem “Guilty Plea” that muses “While waiting in the holding cell – / made of concrete blocks and stainless steel – / sometimes I think the best thing / about being a lawyer is / when this interview is over, / I get out of jail.”

His work in law might feed his body, but his writing nourishes his soul. “The last five or six years have been the happiest since college,” said Clowers. “I am doing what I want to do!”

He is a member of the Unabridged Poets writers group, he has taught poetry classes for Learning in Retirement, and recently published his first poetry chapbook, Shedding My Three Piece Birthday Suit. He earned an honorable mention in the 2010 Wisconsin Fellowship of Poets Muse contest and received second place in the Grutzmacher/Pulse Poetry contest (along with past honorable mentions). He will be featured reader for the Dickinson Poetry Series on January 11, 2012. His work has appeared in a number of publications, and one of his poems has been included on the Poetry Trail in Newport State Park.

At a poetry reading someone asked Clowers if his creativity “came from activity or from sloth.” He answered, “Writing to me is paying attention to what’s going on and then perceiving the relationships” resulting from experience interacting internally and externally with the poet. “Before I write a poem,” he added, “I have to have a metaphor. In its simplest terms, a metaphor is about relationships.”

“I once saw a child on shore watching me sail, and I thought that that child so many years ago could have been me wanting to be where I am now,” said Clowers. “As a child, I didn’t want to be on shore; I wanted to sail. As a child, I wanted to be a writer.”