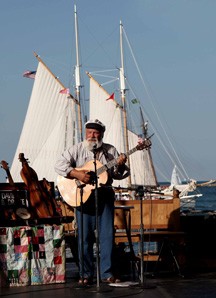 “There’s a point where you know too much,” laughs performer, educator, and seaman David HB Drake, who has lost a gig or two when he tried to explain the nonexistence of ‘pirate songs.’ “Pirates sang the same songs as everybody else!” he says.

Luckily, The Gibraltar Talks Series presented by the Gibraltar Historical Society has not requested ‘pirate songs’ at his upcoming program on Oct. 10 at 7 pm.

“A Schooner’s Songbag” will feature history about the hardships and livings made by the men of the Great Lakes during the nineteenth century, as well as songs used in the days of the schooners.

“I give a lot of background,” says Drake. “My storytelling is a rather long introduction to a song. It’s not formal. Anybody can ask a question at any time.”

Many of the songs Drake will perform were sung by the shantymen of the tall ships. “I’ve worked on ships as a shantyman, which is basically the ship musician,” he explains. “A shanty is an acapella song you sing as you work – you sing to get everybody hauling at the same time. How pretty you sing means nothing.”

The shantyman bore the responsibility of keeping all the men on the same beat, raising the anchors or sails as efficiently as possible. “There are different songs for different tasks – raising the anchor is slower than raising the sail,” he says. “They sing songs to coordinate, but also because it would get boring. They didn’t have Walkmans back then.”

Drake will also perform songs the men sang during their free time, songs about girls and booze, as well as songs he and others wrote about Great Lakes’ history, storms, and shipwrecks.

“The Great Lakes is in my blood,” says Drake, whose father instilled in Drake a love for the water early on. “My dad was in the Navy and trained on the Great Lakes,” he says. “We would sit there and listen to the clinking of the masts and he would point out the different types of boats.”

For more than thirty-years, Drake has passed on the love of the Great Lakes to many, performing at maritime festivals, museums, libraries, schools. During the most recent Tall Ships Festival he followed the ships and performed at many of their stops, including Chicago and Duluth.

Drake will likely wear his seaman outfit – bell-bottomed pants, which were easier for the seaman to roll up, he explains; and a flour-sack shirt, which is what many of them wore, he adds; and teach the audience a thing or two – such as, there is no such thing as a ‘pirate song.’

Gibraltar Talks programs are held at Old Gibraltar Town Hall, 4176 Maple Street in Fish Creek. Admission is free, although donations to the historical association are appreciated. For more information call 920.868.9335 or visit historicnoblehouse.org.