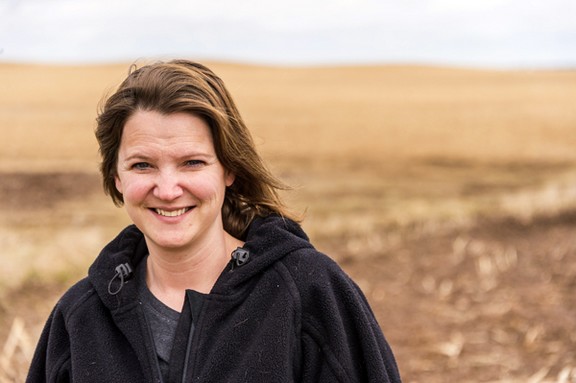 When they went to the polls April 7, the residents of Kewaunee County overwhelmingly approved a big step to protect the area’s groundwater.

Each of the county’s 14 municipalities voted to ban farmers from spreading liquid manure between Jan. 1 and April 15 on land with less than 20 feet of soil to bedrock. The ordinance is an effort to prevent some of the 554,990,508 gallons of liquid manure spread in the county annually from contaminating groundwater.

The results did not surprise Davina Bonness, head of the Kewaunee County Soil and Water Department, who said in a March 10 interview that “I do have a sense that people are behind it.”

She had that sense largely because she believes farmers trust the office and know they can go there for solid advice on how to cope with the new ordinance.

“They drink the water just like everybody else,” she said. “Their animals drink the water. It’s not just one side vs. another. It’s everybody. I don’t say it’s a CAFO problem or a small farm problem or failed septic systems or fertilizing your lawn. It’s land use, everything that goes on these areas where there’s really shallow soils to bedrock. That’s the point I really try to drive through my office.”

Bonness, who took over last October when longtime department head Andy Wallander retired, personally walked the land and plotted GPS coordinates of karst features that are now contained on maps that she and her team can use to help farmers comply with the new ordinance.

And as the one who walked the land as a county water quality specialist, she got to know the farmers and landowners to the point where an important level of trust exists.

“I knew what I was doing, so had a good reputation with farmers and landowners,” she said. “They trust us. They can come in and tell us what they’re doing and know we’re not going to slap a fine on them.”

Bonness started in the department as an intern in 2004 while she was earning a Master’s degree at UW – Green Bay. After 18 months she became a water quality specialist.

She said the transition to department head has been relatively easy.

“We have an amazing staff here. Whenever you have a great staff backing you, it’s an easier transition.”

She also recognized that as a water quality specialist – the boots on the ground for the department – she was buffered from the politics of running a department with oversight by elected officials.

“I knew it would be more political,” she said. “When I was just a water quality specialist, I didn’t have to deal with the county board and LCC [the Land Conservation Committee which has oversight of her department]. My office is to protect land and water and to do that through the regulatory authority that we do have through our programs. I think that’s a good thing, to step back from the politics.”

The groundwater ordinance is a big step forward for groundwater protection, but Bonness says there are larger forces at play.

“We can have some of the best stewards of the land who do everything to the T, but we have this person called Mother Nature who doesn’t care what we do, and gives us two inches of rain or two inches of snow that melts in one day” she said. “When you have sinkholes and fracture traces, you can do everything perfectly and it still can happen. That’s why I don’t try to blame it on one group.”

Bonness said she’s uncertain that the new ordinance will fix all of the groundwater problems, but she does expect it to have a large impact.

Time, however, will tell. Bonness has started a research project in the Town of Lincoln, where many wells test for pollutants. Her department will test 25 wells twice a year to gauge if water quality in the aquifer is changing.

“Now we can show, there’s no spreading from Jan. 1 through April 15, is that helping? And we have baseline data to know,” she said.

For the future, Bonness has hope for the potential of bio-digesters and other technology to help prevent manure from polluting waterways and groundwater.

“Treatment is going to have to be the answer moving forward,” she said. “I don’t know the timeframe of that. My job doesn’t allow me to say, we’re going to be treating by this time. I have to think about this spring. So I let the people who are doing research do the grants and the research.”

For the immediate future, the focus of her department will be on compliance with the new ordinance.

“We’ll be working a lot more one on one with farmers,” she said. “We’re ready for that. We’ve got the maps made. Any farmer who walks in the door, I can pull out exactly whatever fields are needed to show where you can and cannot spread. We’re ready.”