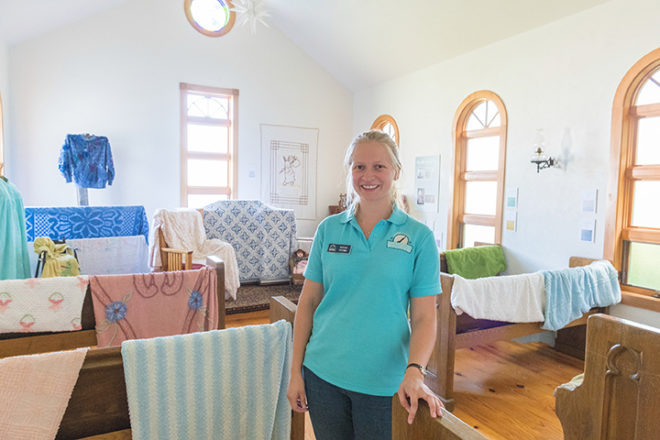 Though the temperatures on the peninsula are cooling down, the Door County Historical Society is warming up with its first ever temporary exhibit, Chenille Bedspreads: From Rummage to Treasure.

This exhibit, on display through early October, highlights the history, technique, economy and fashion of chenille, a type of yarn and fabric whose French translation is caterpillar, an indication of its tactile and visual qualities.

The display is described as a “walk down memory lane” by its organizers, executive director Trudy Herbst, intern Megan Thornton, and fellow Chenille Bedspread Committee volunteers Ruthi Henrichs, Virginia Feld Johnson and Nan Krause. It was a memory-laden trip made possible thanks to Sturgeon Bay native David Mathy.

Last year, Mathy donated 20 colorful vintage linens, including 14 chenille bedspreads, to the society’s annual Grandma’s Attic Rummage Sale, inspiring the exhibit’s creation. As a child, Mathy enjoyed visits with his grandparents, where his interest in weaving began. In the reader board introducing guests to the exhibit, Mathy relived these early memories:

“My grandmother weaved household textiles into rugs using a flying shuttle mechanical loom. She cut the fabric into strips, sewed the pieces together spreading bits of color throughout to make long, thin strips of fabric called weft. She then wove them into rugs to supplement the family income. Area weavers were noted for creating distinct colored patterns into their rugs.”

As an adult, Mathy began spotting chenille bedspreads at craft shows and in farmers markets, often repurposed into woven bathmats. He began his collection, transforming the damaged bedspreads into woven rugs, and storing the rest until sharing the collection with the historical society.

Now, lovers of textiles and fabrics are invited to walk through the village chapel of Heritage Village at Big Creek to view Mathy’s collection interspersed within the 41-item exhibit showcasing bedspreads, pillows and garments spanning from the early 20th century to today.

The timeline of chenille’s introduction and rise in the American textile and fashion industry parallels the mission of Heritage Village at Big Creek, which is to showcase the way of life for rural Door Countians from post-Civil War to pre-World War II (1880-1910). “Textiles and the fashion industry came together through chenille because chenille fashions became quite en vogue in the teens, actually back in the 1890s it started,” Herbst said.

“It really started down south in the Appalachian region,” Thornton added. “That’s where many of the factories really started as well, along the Dixie Highway going north and south.”

When Midwesterners and Canadians traveled south for the winter, they used the Dixie Highway – a network of roads connecting Canada to Florida – to get there. People living along the travel route took advantage of their visibility and opened up a variety of roadside businesses – gas stations, restaurants, produce stands and souvenir shops.

“There would be gift shops and things with bedspreads hanging out on the clothesline for people to come and stop and pick out which one they wanted and take that home as a souvenir,” Thornton explained.

Though the Dixie Highway ceased to exist by that name by the mid-1920s, the highways comprising it continued to serve an important role in chenille’s spread through the United States. Eventually, a stretch of U.S. Highway 41 (formerly part of the Dixie Highway) in Georgia became known as “Peacock Alley” for the abundance of chenille bedspreads adorned with the popular peacock display.

From its dedication as a yarn and fabric used for throws, mats, bedspreads and carpets in the 1930s to its introduction to the clothing industry and reduce-reuse-recycle movement of the 1970s, you would be hard-pressed to find a generation unfamiliar with chenille. Whether that evokes memories of soft blankets at grandma’s house or a gaudy, head-to-toe ensemble is another matter.

“The best one is they used it for their entire décor in their bedroom,” Herbst said. “A lady would have a particular style robe and the same pattern would be on her bedspread, on her dressing table, on her curtains, on her rugs.”

Chenille Bedspreads: From Rummage to Treasure is on display through Oct. 4 in the chapel of Heritage Village at Big Creek, 2140 Michigan St. in Sturgeon Bay. Visit the exhibit Tuesday through Saturday from 10am – 3pm. Admission is $6 for adults and free for children under 18.