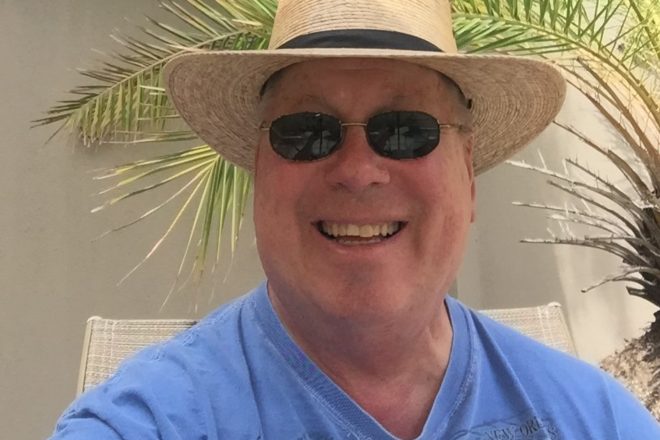 J.B. Sensenbrenner is a lifelong writer and an avid traveler, outdoorsman and environmentalist who divides his time among New Orleans, Appleton and the lakefront home south of Sturgeon Bay where he and his family have lived for more than 50 years.

The Love of Hunting is available for purchase at Door County Land Trust, Greystone Castle and Howie’s Tackle in Sturgeon Bay, or online at amazon.com.JBSensenbrenner.

During the summer before my senior year at Marquette University, I helped my father cut down trees on a hillside to free up space for building a house. Dad vowed to plant more trees to replace those that were sacrificed. From that moment on, I shared his love for Door County. The next summer, we planted 50 trees, replacing the 20 that we had cut. We fished and hunted together in the surrounding woods.

My children followed in our footsteps, chasing monarch butterflies with nets when they were young, and eventually joining us fishing for trout and deer hunting.

We fell in love with the water, the trees and the wildflower-covered fields. We continue that relationship today as enthusiastic members of Door County Land Trust and The Nature Conservancy.

During college, because of my typing ability (80 wpm), I typed term papers for classmates and friends. Gradually, I made corrections as I typed that evolved into editing, rewriting and ghostwriting. The more I wrote, the better my writing got.

Specifically, I write early in the day – sometimes at 4 am. After writing the story on paper, I research and expand it, edit, write many drafts, have others review it, edit again, and rewrite it again and again, until satisfied. I usually do a minimum of 10 to 20-plus drafts.

The work should not include any typos or misspellings. The story should be interesting.

I have attended 10 four-day Tennessee Williams Literary Festivals in New Orleans. I’ve attended author panel discussions, lectures and master classes. I remember how an agent and an editor told the audience that it could take five to seven years for new works to be published.

Two authors from Alabama spoke about a new Amazon company called KDP (Kindle Direct Publishing). The author submits work at no cost up front to KDP. It is reviewed, and the author is told what corrections need to be made. The writer is given many options on book design, and it can be published in paperback and/or electronic, and recently in hardcover. Amazon helps promote and sell the book and pays the author a royalty monthly for each book sold.

I have recently read three historical fiction books by Marion Kummerow, a German author – Unwavering, Unrelenting and Unyielding – based on her grandparents living in Berlin before and during World War II.

A young boy sat in the corner of a dark cave with his face glowing from a small fire. He added twigs, one at a time, to keep the fire burning. His father, Saul, had given him strict orders that morning to keep the fire going. “Don’t let it burn out, no matter what,” he said.

The boy broke branches into sticks the length of his arm and set them in a neat pile. He had been “the keeper of the fire” before when his mother was making food with the other women in a different cave and his father was off hunting with other men. He had learned how to maintain the fire as small as possible, so it didn’t require much wood. He just had to keep it going.

Although he felt honored to be the “keeper of the fire,” the boy soon grew bored because there was no one to talk to. His only brother, Gar, had fallen off a cliff during a recent hunting trip chasing deer. The boy missed him. His father brought Gar’s body back and told the clan how brave he was as a hunter.

He couldn’t stop thinking about his brother. How they would throw rocks to see who could throw the farthest. And how they would hold their heads under water in the cave pool to see who could hold their breath the longest. They would race each other, too. He couldn’t catch up to Gar because he had longer legs. He was twenty moons older. He really missed Gar.

The boy picked up a burning stick from the fire, stood up and held it to light up the cave wall. He rubbed his other hand on the wall, moving it slowly up and down. It felt smooth. Real smooth.

He knelt down and picked up a piece of burnt wood that looked like a “black stone” and rubbed it on the wall, leaving a mark. Then he made a black line. He rubbed the stone up and down, then stopped. A story his brother had told him flashed in his head. It happened several moons ago, while Gar was on a hunting trip with his father and other clansmen.

Gar said they were chasing deer with their spears towards each other, but the deer escaped by swimming across a river. He remembered Gar laughing when he said, “Brother, you should have seen them swim. We could only see their heads bobbing above the raging water! Their antlers were so big they looked like branches.”

He leaned closer to the wall and drew the heads of five deer with large, branched antlers, holding their noses above the water. He drew until the “black stone” wore down to nothing and then picked up another black stone and drew wavy lines beneath the deer heads to show the fast water.

When he was done, he sat down by the fire. It was reduced to embers from his lack of attention, so he carefully set several sticks on the embers and blew on them. The flame returned. He noticed there were more “black stones” on the edge of the fire pit from past fires.

He added more sticks to the fire. The flames rose higher, lighting up the wall. The boy jumped back as the deer on the wall came alive. They seemed to be moving in the river. The fire made them look like they were moving – swimming. He liked that. He added more sticks. Sure enough, the deer were swimming – lit up by the waving flames. Several suns later, word of the boy’s “swimming deer” spread to other clan members. Soon, the cave was crowded with people laughing, oohing and aahing at the moving creatures. It made the boy feel good because it was his way to remember his brother. The boy became known as “Stones,” the painter of deer. It was the first deer-hunting story ever recorded.