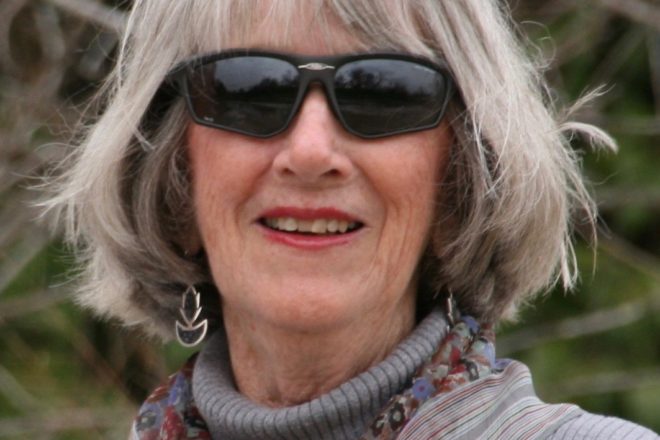 Jan Wrede has published four nonfiction books, her most recent being Outspoken: The Olly Neal Story by Olly Neal Jr. as told to Jan Wrede.

Wrede and Neal Jr. worked together in 1969 and 1970 as civil-rights activists in eastern Arkansas, where they opened an outpatient clinic for the poor in the community where he grew up as the son of a struggling sharecropper. They were young, and like many others during the 1960s and 1970s, they were “charged with an unreasonable courage to create change,” Wrede wrote.

In 2016, Neal Jr. – by then, Judge Olly Neal – and Wrede reconnected through a shared desire to pass on the passionate courage of their youth to a new generation of activists, and they chose to write this story together in his voice, with no commentary.

Wrede has enjoyed and since retired from careers as a community organizer, classroom science teacher and environmental educator, but the perennial need for civil rights and conservation always motivates her.

In what way does your connection to Door County influence your writing?

Because my parents saved gas coupons so they could vacation here during the wartime summer of 1943 when my mom was pregnant with me, I always brag that I’ve been coming to Door County since before I was born. It has always been a place where I feel happily at home.

During the five months a year that I’m in Door County, I live in dense woods below a high bluff that, until recently, has interfered with an internet connection. Thus, in order to work, I’ve spent many hours interviewing and writing in my car, parked along a village road; on the porch outside a friendly business; and hidden inside a library meeting room.

The writing of Outspoken was tedious and required critical dedication and honesty from Olly and me. I asked questions and recorded him telling his stories every Tuesday morning for four years.

Immediately following each interview, I transcribed his words. This was not easy because he could never stop himself from talking so fast that his words ran together.

Through the years, I researched his stories for accuracy and interviewed others who could contribute important details. From an abundance of recorded words, I organized and wrote down a cohesive narrative of Olly’s life and his time and place in the history of Arkansas.

Passion and a desire to make a positive difference are the reasons I write and the most important part of the process. I’ve always felt that I had something important to say before I sat down to write. And as significant as that may be, the rest is just a series of tasks to be figured out.

I know from experience that getting a book published can be intimidating. This is just another reason why a writer must have personal passion for what you have to say.

I self-published my first book and was exceptionally fortunate to have it picked up by an academic press. My other books were also published by academic presses. Thus, I believe self-publishing is a solid way to get started, and many authors publish all their books this way.

“Just do it” is a useful motto. You can always find help when you need it. Hang out with people who know more than you do. Ask questions. Learn as you go. Don’t give up.

I especially enjoyed reading Between the World and Me by Ta-Nehisi Coates, who convinced me to think of race as a false notion that’s harmful to everyone, especially Black men and women. My last read was Cloud Cuckoo Land by Anthony Doerr, and I’m currently reading Harlem Shuffle: A Novel by Colson Whitehead.

The following is an excerpt from the preface of Outspoken, in which Wrede introduces readers to Olly Neal Jr. and shares some of the inspiration behind putting the book together.

I chose to be faithful to Olly Neal’s words without including any comments from me. I recorded, transcribed and used our weekly interviews. Through the years, I researched what he told me for accuracy and interviewed others who could contribute to Olly’s stories. I organized his words into a cohesive narrative of his life and time and place in the history of Arkansas.

No historian or storyteller is neutral. Here Olly Neal speaks with the personal knowledge of how events affected him and the Black community. No history is an exact science, and facts can be interpreted in different ways. Historians insert suggestions by the way they present what happened.

For example, concerning the 1970s Marianna boycotts, a white historian might say, “There were younger whites who would accept some form of political power for Blacks, but it would take time.” That statement could have been true, but Olly would never say that. Never. That statement suggests that Blacks were not being sufficiently patient, and Olly knew from personal experience that Black folks had been patient for too long. No more waiting. Now was the time for change.

In the early 1970s, we were thinking far beyond our actual age. We were young and ignorant of how to run a community health center. But for us, that didn’t matter because, as with many others in the 1960s and 1970s, we were charged with an unreasonable courage to create change. Now we want to pass that passionate courage on to a new generation of activists. We want to inform and inspire you to be unreasonably strong in your commitment to the change you want to see.

The following is an excerpt from Chapter 2 of Outspoken, in which Wrede transcribed a story Neal told her.

When I was 14, I got caught stealing. I worked before school each morning cleaning up a store, and I took that stuff because I was trying to keep up with the boys. I wanted to have matching socks and belt, or whatever was matching at the time. I think I was trying to make up for my immaturity, and I don’t blame anybody for that.

The police came as soon as school started to arrest me and take me to jail, but Mrs. Strong stopped them. She told them, “Our boys don’t go to jail!” I don’t know how it was that those white policemen listened to her, but they did. She could protect me only until school was out. Daddy was out in the field, and she had me send word for him to come right away.

He got there at about 2 o’clock and arranged for me to pay off what I had stolen. Then he took me home. That was in the spring, and Daddy kept me out on the farm all through that summer. I was out cutting timbers for railroad ties to pay it off. He didn’t let me come to town at all.