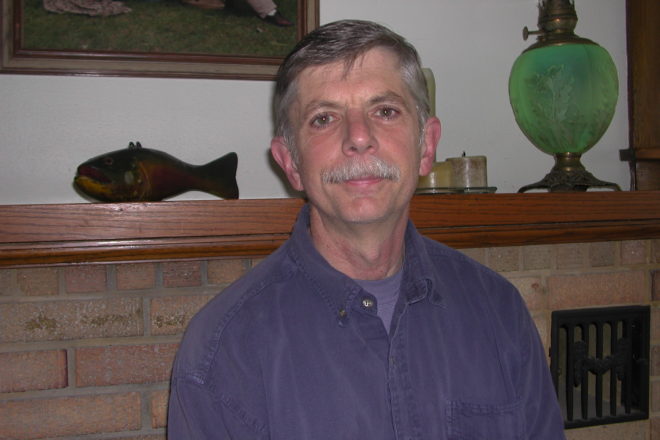 Growing up in the northern Minnesota community of Cloquet, Rudy Senarighi began trout fishing as a youngster, often riding his bicycle eight miles in the dark to be able to be on the stream by sunrise.

A diagnosis of cancer in 2000 prompted him to reassess life’s priorities. He began writing his first book, Listen for the Whitethroats, upon retirement from a 35-year career as a middle school educator in 2003 and has since written and published four additional memoirs: In Pursuit of the Rise, Tales from the Creel, Lessons of the Manitou and The Great Adventure.

Door County was my family’s home for 40-plus years. It is the physical place where I began to seriously do my writing. It provided me with a comfortable sanctuary to write in. It offered me other individuals, both author and not, for resources and support. Now, having left the county and moved to Madison, the Door County Published Authors Collective group is an important extension of that “net.”

Please talk about your writing process.

I do not set time limits or end dates as goals on my writing. I do not write every day. I write when I feel there is something to say or when I have an idea that I don’t want to lose.

Sometimes that means I jot down an idea or passage that comes to me on a scrap piece of paper or a napkin; just so I won’t lose that thought. Later I will transfer the idea to a manuscript I am working on.

When I do sit down to write, I will write for a block of time, then put what I’ve written away for whatever amount of time I feel I need to let the story lie. I really believe that you cannot force or push the writing process.

I write nonfiction and memoirs, so for me it is the voice [of the writer] and utilizing constructive feedback and criticism from proofreaders and critics who are not familiar with you or the information/topic of your writing. Reread your writing; make changes. The thesaurus is your friend, but don’t overuse it.

There are many different avenues you can choose to pursue. But first ask yourself: Why are you writing this book? What is your goal concerning publishing? Do you want to have a bestseller and movies made from your book? Is it for a select or special population or group? Do you want to get people to read your writing? Do you want to make money selling? Are you able to do the footwork of getting your book out, or would you rather have someone else do it? Are you thick-skinned enough to take the large number of rejections? Are you willing to let the rights to your writing go to someone else?

After my 35-plus rejection letters from publishers, I self-published. I ended up doing some formatting and some editing as well as most of the promoting for my book.

I am reading Fifty Miles from Tomorrow: A Memoir of Alaska and the Real People by William L. Iggiagruk Hensley.

The Door County Published Authors Collective is a group that brings together and champions local writers. The group formed following the Door County Book Fair in 2021.

Excerpt from Senarighi’s memoir In Pursuit of the Rise

Our group had split up that day, Neal and Ryan fished downstream while Bob and I fished upstream. The sky was overcast, but the temperature and humidity were very high. Heat and dampness aroused the local mosquitoes and also helped quickly dissipate any insect dope that we applied.

Bob and I fished upstream for a few hours, then decided to head back toward the truck and meet up with Neal and Ryan. Walking back downstream, we came to the last large, deep pool.

“I’ll catch up,” Bob said to me. “I’m going to try it here for about twenty minutes.”

“Can you find the truck?” I asked, knowing that this was his first time in this area.

With that, I continued toward the truck. I turned back as I entered the thick tag alder and watched Bob begin to cast the head of the pool.

Arriving at the truck about five minutes later I found that Neal and Ryan hadn’t returned yet. So I leaned my pole against the truck, and decided to clean the fish I had caught. After gutting and gilling the evening’s supper, I buried the entrails and walked to the stream to wash out the body cavities of my catch.

As I knelt there on the bank of the stream washing the fish, I heard Neal’s and Ryan’s voices coming from downstream. The sounds slowly louder and soon I saw them approaching.

“Got a couple for the pan,” was the reply.

The three of us walked through the short stretch of brush back to the truck. We expected to find Bob there waiting for us, but that wasn’t the case.

“Did you guys see Bob as you came back?” I asked.

“No. Last time we saw him, he was going upstream with you.”

“Oh, he’s probably still up at that last big pool. I’ll give him a yell.”

I walked to a clear spot above the creek and climbed on top of a huge boulder that was there. From my vantage point, I could look over the tops of the tag alder and see the pool where Bob had stopped. But, I could not see Bob. I cupped my hands around my mouth and yelled in the direction of the pool, “BOB!!!”

I got no immediate response. I tried again, “BOB!!!”

From off to my right, high up in the forest came a faint reply, “Where the hell is the truck?” It was Bob.

I yelled again and continued to do so until he emerged from the brush. Actually, he seemed to burst from the bushes. He didn’t say a word as he stumbled past us and went directly to the cooler in the back of the truck. His clothing and what hair he had was plastered to his body with sweat. His eyes were stretched wide open into an almost wild look, or perhaps one of desperation. A cloud of mosquitoes and gnats circled his head and shoulders, alighting on him at will to feast. It reminded me of a time I was in Alaska and had gone to see Mount McKinley. We could see the lower slopes, but the peak was socked in with clouds that obscured the view of the top. Bob and his bugs resembled Mount McKinley. He threw open the tailgate of the truck, wrenched the cooler lid off and thrust his hand inside to retrieve a can of beer. Bob then turned around, sat down heavily on the tailgate and pressed the cold can to his forehead. The three of us stood there mute, the only sound coming from the horde of insects that buzzed and strafed Bob’s head and shoulders.

Slowly Bob began to relate what had happened.