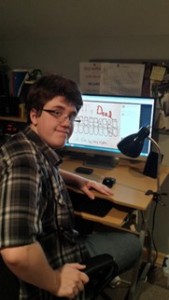 As strange as it seems, Jeff is Dead, and that’s a really good thing. At least it is if you are Chris Mydra, junior at Gibraltar High School. It is the title of his first full-length film, which he both wrote and directed. A seasoned filmmaker at age 17, Mydra and his then co-director Connor MacDonald won first place at the 45-Hour Short Film Festival last fall with the zombie comedy Rotten Romance.

Jeff is Dead is Mydra’s newest project and this time he had more than a weekend, as well as grant money for his budget. The Student Art Initiative (SAI), brainchild of former Gibraltar student Anya Kopischke, is a fund available for students at the school to finance creative projects.

Kopischke personally garnered donations to get SAI off the ground. She used the money to write and direct two plays, with performances repaying the SAI fund so that it remained almost completely self-reliant.

Inspired by Gibraltar art teacher Tom Smith, Mydra started the script for Jeff is Dead in the summer of 2013. “I wanted to make something that showcased the absurd teenagers who don’t react to something major, like a death,” says Mydra about his original concept. Before long he realized that the idea had full-length potential and applied for a grant from the Student Art Initiative. High School principal Kirk Knutson and Kopischke, now a student at Bard College, New York, both gave his project a green light.

With a budget of $400, Mydra finished the first draft of his script and started major rewrites by September. He opted to start filming in late February 2014. “I wanted to see if any relatives would end up giving me money for Christmas so I could add it to the film budget,” admits Mydra. The only requirement of the grant is that he generate enough revenue from his film to refill the SAI coffers.

He started with auditions to cast the movie, but turnout was low. Instead, he did some quick readings during lunch period the next day. Soon he had a group of eight student actors and one adult – local film guru and Mydra’s mentor Chris Opper.

“From the first moment I met him, I was amazed at how much knowledge he had about movies and the process of filmmaking” Opper says about Mydra. “Working with him as the director has been so great. He totally understands what it takes to make a good film and he is such an old soul when it comes to movies.”

Mydra says the most difficult part of the process has been staying organized and keeping track of his shooting schedule. The most gratifying thing about the experience? “I learned how not to make a movie,” he laughs.

This knowledge will come in handy as he plans to attend either the University of Wisconsin – Milwaukee or Madison for his general education courses, and then transfer to University of Southern California (USC) or New York University for film school. According to Mydra, those schools were the home of film royalty, with George Lucas and Steven Spielberg meeting at USC.

Jeff is Dead premiers at the Door Community Auditorium on May 16 at 7 pm, with additional showings at 7 pm on May 17 and 2 pm on May 18. The film is approximately one hour and tickets are $3.

The film contains some mild violence and occasional language, though Mydra is fairly certain he edited most of the cuss words out. All proceeds from movie go directly to the Student Art Initiative. Mydra hopes other students will take advantage of the available funds and bring their own creative projects to fruition.