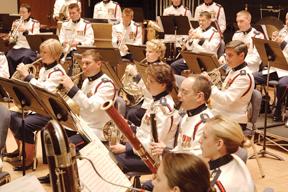 From its home at the Coast Guard Academy in New London, Connecticut, the United States Coast Guard Band will travel to the Door Community Auditorium in Fish Creek to present “Liberty for All,” a concert set for Friday, July 24 at 8 pm.

The 55-member Coast Guard Band is one of the nation’s elite premier military bands and the proud musical representative of the United States Coast Guard and the Department of Homeland Security.

The musical line-up for the concert is comprised of a striking array of selections, such as Leonard Bernstein’s bitingly satirical overture to Candide, Frank Ticheli’s moving setting of “Amazing Grace,” and the young American composer John Mackey’s “Kingfishers Catch Fire.”

James Beckel wrote “Liberty for All” for orchestra and narrator, and the Coast Guard Band commissioned the band arrangement. For the narration, Beckel selected moving passages from the prose of Presidents George Washington, Abraham Lincoln, and John F. Kennedy.

Two talented soloists are featured in the performance. MUC Joel Flunker is the gifted cornetist in “A Tribute to Bix Beiderbecke,” and soprano MU1 Lisa Williamson sings Antonín Dvořák’s “Song to the Moon” – in Czech. The program ends with the stirring “America, the Beautiful,” also with MU1 Williamson as soloist.

This concert is free and open to the public, but tickets are required. At this time, all tickets have been distributed. The Door Community Auditorium is requesting that anyone who has tickets but is unable to attend the program please return the tickets to the box office.