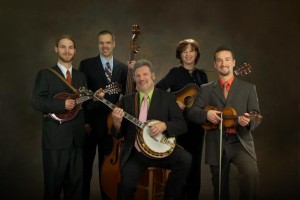 Straight Up Bluegrass is all about the way traditional music was meant to be played. Performing in the style of Jimmy Martin, Bill Monroe, and Third Tyme Out, Straight Up Bluegrass performs the songs that people remember. In the final concert of the Door Community Auditorium Fireside Coffeehouse Series, Straight Up Bluegrass will take the stage for an impressive evening of bluegrass. The concert is scheduled for Saturday, March 15 at 7 pm.

With lightening quick banjoes and fiddles that fly, Straight Up Bluegrass combines instrumental arrangements with three-part harmony and high lonesome vocals to recreate the sound of bluegrass familiar to fans around the world. Under the leadership of lead singer Mike Rospenda, the five-member band performs bluegrass standards including “Freeborn Man,” “Gathering Flowers From the Hillside,” and “I’ve Just Seen a Face.”

Joining Rospenda, who also plays the banjo, are Terry and Bill Bane performing as the bass and guitar duo. While Terry Bane performs soulful vocals, Bill Bane “drives the bus” with his thumping, running bass lines. Fiddle-player James Block steps up to the mic in his role as lead singer, and Brent Eastman rounds out the band with his mellow, hard-driving mandolin playing.

Performing in festivals throughout the Midwest, Straight Up Bluegrass is gaining praise for its music from casual fans to true aficionados.