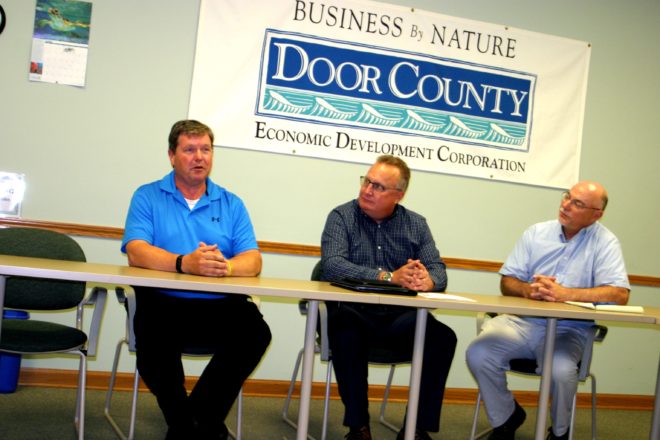 Jim Schuessler (left) was introduced at a June 29, 2018 press conference as the new executive director of the Door County Economic Development Corporation (DCEDC). He is seen with DCEDC Board Chair Darren Voigt and interim DCEDC director Bill Chaudoir. Photo by Jim Lundstrom.

Door County’s housing shortage is a well-known problem, but Jim Schuessler prefers to think of it as an opportunity.

“I found out about it firsthand today,” Schuessler joked at a press conference held June 29 at the Door County Economic Development Corporation’s (DCEDC) Sturgeon Bay office to announce that he has been hired to serve as only the third executive director of the DCEDC in its 30-year history.

Schuessler was chosen to replace Caleb Frostman, who resigned from the position in April to pursue the 1st District Senate seat, which he won in a June 12 special election. Prior to Frostman, Bill Chaudoir had served as executive director for the first 27 years of the organization’s life, and he stepped in to serve as interim director when Frostman stepped down.

Chaudoir had already clued Schuessler in to the work the DCEDC has already done on the housing issue, including the housing survey that is underway. Housing was also an issue at his last position, as business development manager for the Sheboygan County Economic Development Corp., where he said they worked with municipalities and developers to create more than 1,000 new living units.

“The right things have taken place here,” he said. “It’s an opportunity.”

That is the first time any official in Door County has referred to the housing shortage as an opportunity, so Schuessler is certainly bringing a fresh perspective to the job.

Schuessler is a native of Oconto Falls and a graduate of the University of Wisconsin-Platteville. He explained that he spent the first two decades of his working life in television, beginning in sales and working his way to to group president. Upon the sale of the group, Schuessler began his second career in economic development when he was hired in 2011 to lead the newly formed Forest County Economic Development Partnership.

Schuessler mentioned that Bill Chaudoir was one of the first people he met when he was starting his new career, who provided him with “a strong foundation of economic development.”

“Bill was kind and generous and shared a lot of information,” he said.

“Since I’ve known him, he’s impressed me wherever he’s been,” Chaudoir said. “He has tremendous passion for economic development and is excited about it. I feel really, really good about the future of this organization. I have to congratulate the board of directors for doing a really good job.”

Darren Voigt, chair of the board, said he and the rest of the board were impressed by Schuessler’s knowledge about economic development.

“We had a highly qualified pool of applicants and feel very fortunate to be able to bring a leader of Jim’s caliber to Door County and DCEDC,” Voigt said. “His business background and demonstrated unique solutions to economic development issues really impressed the search committee. Special thanks go to my fellow board member and Personnel Committee Chair Patti Vickman for leading the search, and to Diane Biersteker from Human Resources Consultants, LLC. who helped guide the process. The board also appreciated the leadership provided by retired DCEDC Executive Director Bill Chaudoir, who served the organization in the interim.”

Schuessler pointed out that Sheboygan County markets itself as “Someplace Better.”

“The only place where you can go from ‘Someplace Better’ is Door County, for so many reasons,” he said. “This is a paradise here.”

Schuessler and his wife, Karla, an elementary school teacher, have three children – a 26-year-old daughter who lives in Arizona and two sons, 24 and 23. He officially begins work July 16, at which point he and Chaudoir will begin visiting business and municipal leaders.