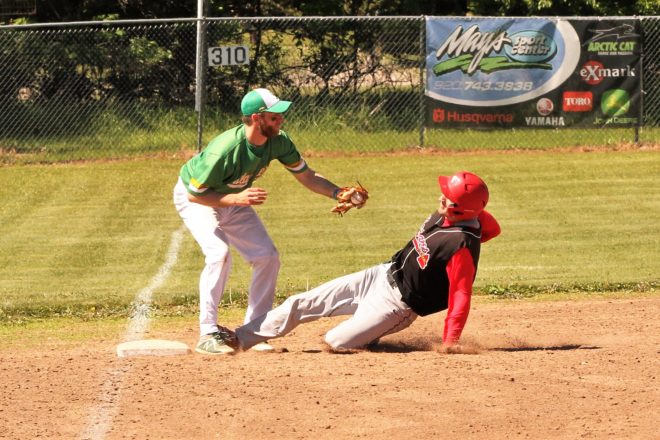 Kolberg has dominated the Door County League in 2022. Here a Kolberg baserunner beats the tag against Washington Island at Kolberg. Photo by Deanna Reinhardt.

I’m writing this during my vacation in Boston, where one of my must-dos was to watch my beloved Red Sox play the Brewers at Fenway Park – one of the most historic and beautiful parks in all of sports. While sitting in the stadium, I couldn’t help but think of the fields in the Door County League and the history of those as well.

In my opinion, Baileys Harbor has the best field. It is kept up nicely with a great field of play, and the lights have added another dimension. Institute is near and dear to my heart because I was one of the many players whose sweat equity helped at the infant stages of building the park during the early ’90s. With lights, it, too, is something special, and most Cubs home games are now played at night. Sister Bay got a new field more than a decade ago and is now a more modern venue. Maplewood is set in a town park, and its quirky dimensions make it special.

Then you get to the other four: parks just built in a plot in the country. Those four truly resemble Fenway Park. The history of those fields is immense: the championships, the Hall of Fame players and the great games. If the fields could talk, they would be something to hear.

The Swami’s alma mater was the team to do him in this week, which left his week at 3-1 and his season record at 42-10.

Let’s look at the final week of the regular season.

The Bays still have second place to play for, so they will be coming to town with arms blazing. Typically a great team at the plate, the hitting has been hit-or-miss lately.

The Cubs found a couple more hits recently, and that has won them two out of their last three games. A final game in front of the home crowd may give them some added spunk. The first time around, the Cubs hung tough, losing 5-0. I expect a close game this time around as well.

A win here, and the Ports could be hosting a playoff game. The Ports got some help from old friends, and the relief pitching of Riley Cordier and Jackson Lindemann was great to see. If Cordier can regain any of his old form, this team would have a staff that could rival Kolberg’s.

The Islanders know what’s at stake here. A win and some help, and they could be hosting as well. After a schedule quirk that had them at home for six games in the second half, this could be their last home game of the year, and I’m betting they’ll play like it.

The Mets proved once again Sunday that they can steal bases in massive quantities. The problem was that they couldn’t get players past third base, leading them to their third-straight loss and out of the playoffs. Jayden Diller is a young player who will keep this team battling for years to come.

The Indians hope to end a disappointing year on a positive note against a team that’s reeling at the finish.

The A’s outhit the Ports last weekend and got strong pitching as well. Joe Burlo had three hits; Jon Kordon pitched seven strong innings; and the A’s hung tough. That says a lot when you’re winless.

The Braves manhandled the Island and now finish the regular season at home, where they will stay until their season is done. Top to bottom, this team is scary, and it will not be an easy task for any team to best the Braves for the rest of this year – or for years to come, for that matter. The A’s are playing better lately, but this is a tough ask.