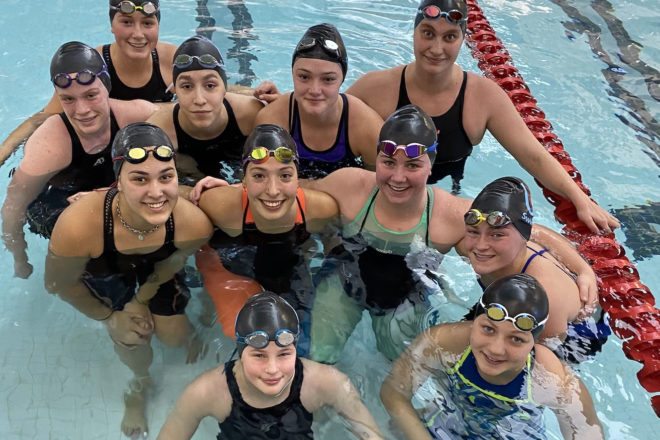 After going undefeated in the Bay Conference, winning the conference championship and placing swimmers on the conference’s first team in every individual event and relay last season, the Door County United (DCU) cooperative girls swimming team’s goal this fall is to be competitive as a WIAA Division 1 team.

“We would like to finish top five at sectionals and get a minimum of two relays and three individuals through to the Division 1 state championships,” said head coach Kelly Oram-Rankin.

Oram-Rankin enters her third season as DCU’s head coach after serving as an assistant coach for a year.

Braun, a state qualifier last season in the 200-yard individual medley after placing fifth at the sectional, was also first-team all-conference in that event, as well as in the 100 breaststroke and as a member of the 200 medley and 200 freestyle relays.

Michalski placed third at the sectional in the 100 freestyle, and was first-team all-conference in the 50 freestyle, as well as in the 100 backstroke and as a member of the 200 medley and 400 freestyle relays.

Wienke was first-team all-conference last season in the 100 freestyle and as part of the 200 and 400 freestyle relays. She also received honorable mention in the 200 individual medley.

Rankin placed sixth at the sectional in the 500 freestyle, in which she was also first-team all-conference, as well as in the 200 freestyle and as a member of the 200 and 400 freestyle relays.

Neville was first-team all-conference in the 200 medley and 400 freestyle relays. She was also named to the second team in the 100 breaststroke.

Oram-Rankin said DCU benefits from an “excellent feeder program through Mike McHugh and the Door County YMCA. Many of our athletes come in through that program and have an outstanding skill set and competitive spirit. The girls are supportive of each other and are great stewards of the sport of swimming.”

Oram-Rankin said DCU has a talent level that’s uncommon for this area, but as the only Division 1 team in the conference, the girls end up swimming against athletes they have not competed against in the regular season when they get to the sectional and state levels.

“This has proven to be mentally challenging for them,” she said.

Still, Oram-Rankin said DCU will be a “strong team of very strong young women. This season, I feel like the team and coaches have hit a rhythm and are ready to build on our past successes.”

Oram-Rankin said she expects DCU will face its greatest challenge during the regular season from Seymour and New London, with both fielding strong teams and having solid numbers.

DCU’s first competition is a pentathlon Saturday at Marinette, prior to the first home meet scheduled for Aug. 25, 5 pm, when the team will host the conference relays at the Door County YMCA’s Carla and Ellsworth Peterson Aquatic Center in Sturgeon Bay.