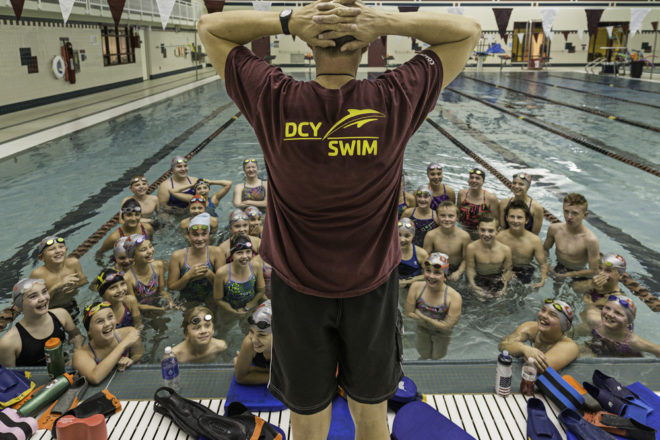 The 2016-17 DCY season recently began for Coach Mike McHugh and the 140 swimmers in the program. Photo by Suzanne Rose.

With the shrill of the whistle, the Door County YMCA swim team is off the blocks swimmingly, starting the new 2016-17 season. In the pool, just about 140 swimmers make up the DCY swim team ranging in age from five to 19 years old.

As the parents of the DCY swimmers begin to pull out their portable chairs, clipboards and flip-flops to begin the weekend treks to Wisconsin-based YMCA pools far and wide – the swimmers have already been training since September.

The schedule for the team comprises of 14 meets and sectionals that run through mid-March 2017.

On deck, head coach Mike McHugh is a commanding presence with high standards in and out of the water. McHugh’s expectations for swimmers begin with a signed Honor Code document from each DCY team member and parents combined with nutritional and sleep recommendations, and dry land training regimens outside of practice.

The YMCA program is based on family involvement so the parents are expected to get off the sidelines and get involved, not only with volunteering at home meets and fundraising events but to engage in athletic challenges. This year’s family fitness plan challenge, soon to be released, will consist of squats, core development, push-ups and pull-ups. McHugh’s coaching philosophy spills over to include parents and coaches, alike. He says, “I expect great dedication and commitment to self-improvement and expect our coaches to match that level. We also expect our parents to reflect the values that we teach in our practices.”

Poolside, McHugh is joined by Steve Schendt, assistant lead coach for the Junior level and Rachel Stollenwerk, assistant coach and lead coach for the Northern Door YMCA satellite practice. As the primary coaches of the team, they work together to manage and train a large team of multi-aged swimmers at two locations up to five nights a week.

The team consists of three age/skill level categories: Juniors, Junior Elite (JE) and Seniors. The youngest swimmers, the Junior level, train first followed by the Junior Elite and Senior level swimmers in a second session on the same days. The amount of training is decided on by the swimmer and parents and only advised upon by the coaches. Practice nights for the two training sessions are held on Monday, Tuesday and Thursday with Wednesday and Friday nights, a single session is offered to work on technique. It is an extremely challenging training session for Seniors and advanced JE swimmers only.

The team goal for the season is to achieve 20 percent progress from beginning to end of season on overall swim events. This is attained by increased practice load for all swimmers while in tandem increasing in practice intensity. The youngest swimmers, Junior level, are excluded from this intense regime but as individual swimmers are ready, the coaches advance the swimmer forward.

In addition to practice goals, the hope to increase the number of swimmers who advance to state and national competitions is a mainstay on the coaches’ agenda. In 2016, DCY had 42 swimmers qualify for the state level championships, coming home with 11 state records and a slew of individual medals.

For the DCY top qualifying swimmers, the season and training continues in preparation for the YMCA State Championship in Milwaukee. The YMCA National Competition, held in Greensboro, North Carolina in early April, is for the most elite swimmers from the team. At the National level, the competition stiffens and the team is whinnied down to the strongest and fastest swimmers. In 2016, Macoy Neinas and Max McHugh swam for DCY.

Neinas, the team’s only senior, will enter into his final year as a DCY Doorphin. Neinas has risen to great heights by swimming a seamless backstroke. He has been approached by colleges and will most likely swim collegiately in the years to come.

Max McHugh, as a sophomore in the 2015-16 season, broke two national records and won national titles in the both the 100- and 200-yard breaststroke in the Greensboro competition. More notably, over the summer in Omaha, Nebraska, he swam the 100-meter breaststroke as a qualifier for the U.S. Olympic Trials and came in 85th place in the event. At 16, he was one of the youngest swimmers at the highest level of competitive swimming bringing home “Olympic fever” to the entire DCY team.

Asking McHugh what his favorite thing about coaching the Door County YMCA swim team, he responded, “Seeing swimmers realize that success is determined by their effort, and realizing that excuses are not productive.”

As the team prepares to begin the competitive season, in black racing suits and the classic DCY silver and red caps, I can almost hear the shouting out of the team’s rabble-rousing chant, “We are the Doorphins, we couldn’t be prouder.”