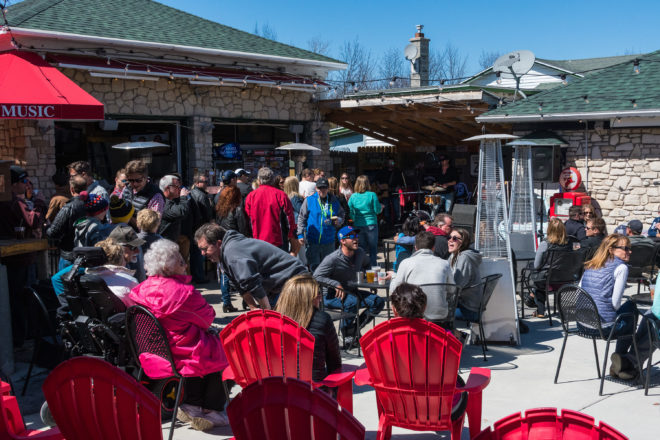 New ideas and investments, like The Garage Bar at Husby’s, have played a big role in the village’s resurgence as a dining, drinking, and outdoor destination. Photo by Len Villano.

If you have enough Sister Bay friends on Facebook, you’ve seen some of them post gripes about traffic, crowds and packed parking lots this summer. Five years ago such complaints were only wished for.

In 2012, Sister Bay businesses were coming off a disappointing season that had many shutting down early, or entirely, as the offseason set in. You couldn’t avoid the consternation expressed by workers and business owners in bars, coffee shops, and stores. Their complaints prompted me to write a column titled, “Dead Zone: Sister Bay’s Business Climate Goes Cold.”

Six years later Sister Bay is a village other business communities are vying to emulate.

Here’s how it happened.

Expanding the Waterfront, Engaging the Community 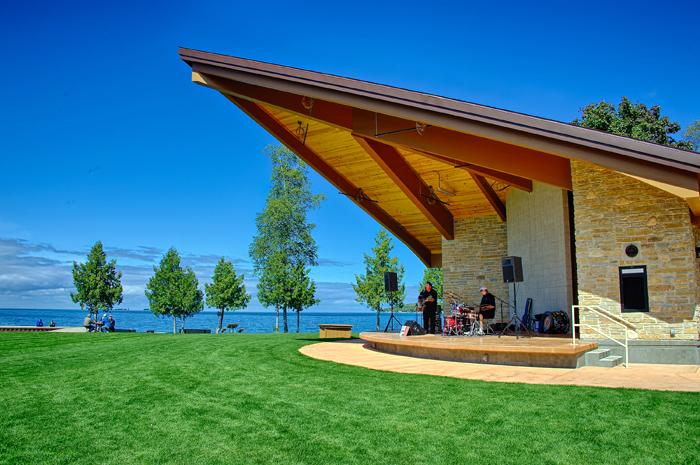 The Waterfront Park Pavilion is the centerpiece of the largest urban public waterfront in Door County. Photo by Len Villano.

The village spent $11 million acquiring property to expand the waterfront and sports complex. That was parlayed into at least $3.7 million in state grants to offset additional costs to bury power lines, enhance the beach, marina, and park. The result of that investment is the number one reason for the village’s resurgence.

“We built it, and they came beyond our wildest dreams,” said Denise Bhirdo, now a village trustee who was village president in 2007.

That’s when the village bought Helm’s Four Seasons, a large hotel on the water, to prevent it from being redeveloped into high-priced condominiums and expand the public beach. The $4.9 million price tag shocked some, but the move excited many.

“The board had the vision to look at the big picture and long term,” said former Village Administrator Bub Kufrin. “I remember very vividly the meeting when the board was looking at buying Helm’s Four Seasons for $5 million. Peter Trenchard said, ‘Five million is a lot of money to all of us, but some guy from Chicago or Minneapolis could write a check for that tomorrow and all that property will be gone forever. We need to buy it for our kids, and for our grandkids, and for their kids’.”

With that purchase in place, the village set out to create the best public waterfront in the county. The village formed a waterfront planning committee and held several community visioning sessions that resulted in a plan to acquire all the property on the west side of Highway 42 from Mill Road to the Marina, if and when it became available.

“We agreed to buy Helm’s, and I remember saying that if we’re going to buy all this, we’re going to have to have a plan to get people on board,” Kufrin said. “We can’t just buy it and figure it out later.”

At the time it was expected to take 20 years or more for the plan to come to fruition, but Al Johnson’s waterfront property came available in 2010. The board made a controversial decision to spend another $5 million on the waterfront in the midst of the greatest economic downturn in generations. With that kind of spending Kufrin said it was crucial to listen to the public, and Sister Bay was uncommonly prepared to do so.

Trustees Bhirdo, Ken Church, and Dave Leinau all owned gas stations in the village. Peter Trenchard owned a golf course, and Sharon Doersching was a retired schoolteacher who saw hundreds of people every Friday night as a hostess at the Sister Bay Bowl. “You can’t hide from people when they’re in your store,” Bhirdo said.

“The public was involved immediately so they knew what the village was going for,” Kufrin said. “That plan has basically been implemented in about 10 years. You couldn’t do it with just the board or administrator driving it. You need the community support.” 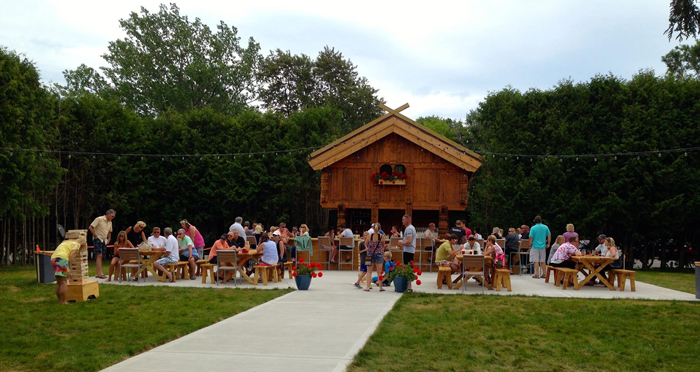 The lot next to Al Johnson’s had sat empty for decades until the family built Stabbur Beer Garden and brought excitement to the space. Submitted.

A great park alone, even one on the water, doesn’t revive a community.

“We hoped there would be individual entrepreneurs who would invest in the village,” Bhirdo said.

There were no guarantees. Sister Bay has made a comeback in large part to a fortunate confluence of ambitious, well-executed private developments.

Mitch Larson bought the old Bunda’s building, once owned by his uncle, and resurrected it as On Deck Clothing. Jesse Johnson opened the flourishing Door County Creamery in a closed bookstore. Jim and Jessica Grasse moved home and opened Grasse’s Grill, and Britt and Sarah Unkefer brought a truly new restaurant concept to Sister Bay with Bier Zot, then opened a second Wild Tomato location next door. Jennie Bexell opened two new retail outlets in an aging building that was falling apart in a prime location. Al Johnson’s filled a hole by opening Stabbur in 2016, and 2017 brought Boathouse on the Bay and the massive new CHOP location. 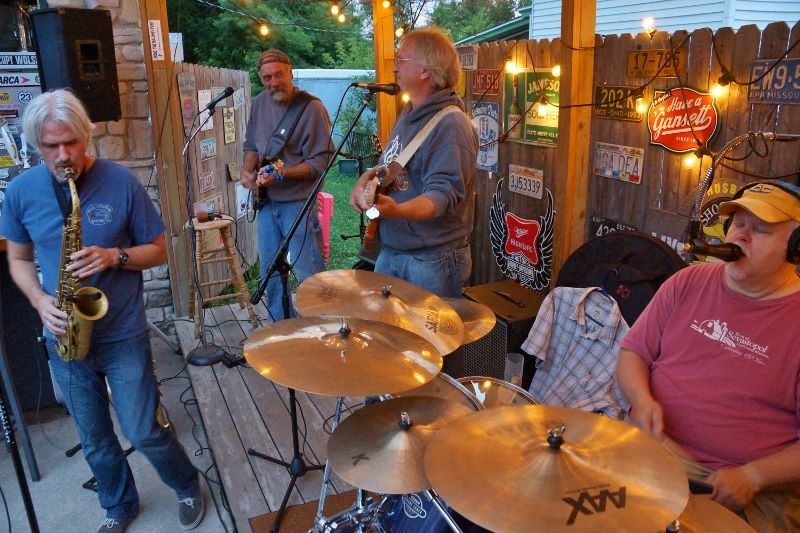 The Garage at Husby’s opened eyes to what could be done with outdoor dining and drinking in Sister Bay.

After more than a century, in some ways Door County is still learning how to be a great destination. Exhibit A – outdoor dining.

“When we went in to fight for The Garage, the administrator wasn’t for it,” said Husby’s co-owner Chad Kodanko. He received three cease and desist letters from the village concerning the outdoor dining and drinking space before the village board recognized that it was exactly the kind of development what they were looking for.

“The board wanted to tie in old buildings, wanted more activity and life on the street, and everything they named was basically The Garage,” Kodanko said.

That move opened the eyes of other business owners. The Sister Bay Bowl opened The Alley bar shortly thereafter, and every new restaurant to open in the village since has had a prominent – if not dominant –alfresco component.

The Garage and Alley Bar wouldn’t have been allowed if the village hadn’t put a moratorium on its parking requirements as part of a package of changes made to help businesses over the last decade.

“We changed to require businesses to build the minimum amount of parking they would need, not the maximum,” Kufrin said. “We tried to say ‘we’re open for business.”

The village allowed businesses to put sandwich boards on sidewalks, add more outdoor seating, and opened the door to commercial boat and watercraft rentals at its beach and marina.

Zeke Jackson, who took over as Village Administrator in 2013, has been credited with continuing to make Sister Bay more friendly to businesses.

“As a whole, what we want to see is for people to be successful,” Jackson said. “So our response, in general, is let’s give that a shot.”

Housing growth played a role in the rebound as well. The stock market crash of 2008 and subsequent economic downturn helped the village in an unexpected way. Long before his Stony Ridge housing development stalled, Kieth Garot was looking to keep his workers employed through the housing slump. He pursued a project to build low-cost housing units in Uptown Sister Bay that the village was desperate for. As a result, dozens of young families employed in the tourism industry bought homes a short walk from downtown.

Head to bars and restaurants throughout Sister Bay and you’ll see lots of tourists, but you’ll also see familiar local faces who take the short drive, bike ride, or walk into town for food and drinks. Sister Bay businesses face the same worker shortage as the rest of the county, but they also have more locals to draw upon living right up the road.

A Change in Attitude

When this author owned Husby’s Food & Spirits from 1999 – 2003, an idea like The Garage seemed a non-starter. At the time, an open window after 9 pm would result in noise complaints from neighbors. Across the street, the Sister Bay Bowl heard complaints about the speaker used to call in people on their two-hour waiting list.

Today, music wafts down the streets of Sister Bay from open air stages past 11 pm.

“A lot of attitudes changed about what people wanted the community to be,” Kufrin said. “A community can’t stay the same and not age or decline.”

There are other factors, and there are still problems. The board is still struggling with how they will pay for all the improvements, and there are some residents who don’t like what Sister Bay has become. The village’s growth has primarily come in restaurants, though that too may change soon.

“We’ll have our first hotel condominium proposal in 15 years coming to the plan commission in a couple weeks,” Jackson said. “Another is in the works.”

Six years ago the village was desperately searching for answers to its economic problems, but Bhirdo said they found them closer than expected.

“One thing we’ve learned is that development comes from the locals, not an outside developer who’s going to come in and save you,” she said. “It’s your local business owners investing. JJ buying Passtimes. Mike Daubner at the Boathouse. Al Johnson’s. Go down the line, and it’s locals who invested and innovated.”

In 2013, Village President Dave Lienau said that the future was bright for Sister Bay.

“That’s why we’re very excited to finally see it start to come together,” he said. “In a year and a half, two years from now, we’ll be walking down the street with big smiles on our faces.”

It might have taken a year or two longer than that, but it’s hard not to walk through Sister Bay with a smile today.