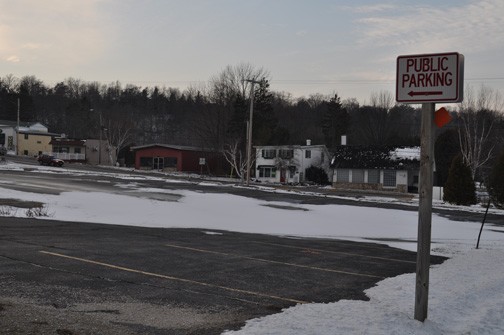 Parking isn’t an issue in Sister Bay lately. Several businesses have reduced hours, closed for the season, or closed for good this year.

Robin Yost, the General Manager of the Scandinavian Lodge in Sister Bay, keeps a guide to Northern Door’s open restaurants at the resort’s front desk. On a winter Monday afternoon, she and I looked over the short list.

“You’ve got another one to cross off,” I point out as she surveys the single sheet of paper. “The Mission Grille is now closed till May.”

With that, the short list gets shorter. In Sister Bay, the lack of activity has not gone unnoticed by residents and business owners.

“It’s really scary to drive through Sister Bay right now,” said Casey St. Henry, program manager at Bay Shore Outdoor Store. “There’s very little open. We get a lot of people who come in and thank us just for being open.”

This winter Al Johnson’s cut back its hours, the Mission Grille closed for the winter for the first time since the late 1990s, the Sister Bay Café cut out weeks of winter hours, and several other Sister Bay businesses that gave the winter a go in past years scrapped the idea.

Sister Bay once prided itself on being Northern Door’s “year ‘round vacation village,” but it can barely make that claim anymore, said Village President Denise Bhirdo. She owns Bhirdo’s convenience store with her sister, Michele, where they’re known for being open late every day of the year.

“As a business owner I certainly understand why some of our businesses are closing for the season or cutting hours,” she said. “But it’s devastating for the village to see so many places closed.”

Bhirdo said business has been flat the last couple years and admits it’s not quite as worthwhile to stay open as it was five years ago.

“But the foundation of our business is that we’re open,” she said.

“We did it more for our customers and we hoped to break even, but the last couple of years we started to lose money staying open,” Bradley said. “When you combine that with not making as much in the summer it’s hard to float the winter months.”

Many were stunned this fall when Al Johnson’s announced that it would stop serving dinner through the winter. Since the early 1970s the restaurant had been open for breakfast, lunch and dinner every day.

“For years we haven’t made money in the winter anyways,” said co-owner Lars Johnson, “but with the economic conditions and the lack of snow in recent years it just doesn’t make sense.”

But Johnson admits that it’s not just tourists that are missing.

“There’s no question that the drop in young families has impacted the local customer base,” he said. “The families that are here are smaller, they’ve cut back on spending, and they’re are busy with so many school activities. It’s just so expensive to have kids today.”

For innkeepers the closings make for a tough winter sell. Yost said her staff is as honest as they can be with prospective guests.

“We tell them there aren’t a lot of places open, but you can still make a great weekend out of it,” she said. She tries to emphasize those places that are open like the wineries, Hands On Art Studio, trolley tours, spas, horseback riding and bowling at the Sister Bay Bowl, as well as hiking at the state parks.

Fortunately, said Nora Zacek of the Open Hearth Lodge, most of the winter visitors know what they’re getting into.

“The returnees usually have their own activities planned or come up in groups,” Zacek said. But the increase in businesses that closed or cut back this year has made an impression.

“People obviously aren’t happy to see their favorite places closed when they get here,” she said. “The biggest impact will be trying to get them back here this time of year again.”

Zacek recognizes that the winter is tough because the bills go up and the customer base goes way down, “but sometimes you have to invest when it’s not as profitable to get more return when it is.”

St. Henry said that has been Bay Shore’s philosophy for many years. They never make a lot of money in the winter, but they committed to staying open every day in part to build loyalty.

“It helps us build rapport with the locals, and people appreciate it. It builds goodwill,” he said.

Several sticking it out

It’s not all doom and gloom in Sister Bay. Pam Butler bartends at Husby’s, where she said she’s seen a slight bump in business in part because of closings elsewhere.

“People come in and say ‘oh my God we finally found someplace to eat!” Butler said.

Even with the closings, restaurants like the Sister Bay Bowl, the Inn at Kristofer’s, JJ’s La Puerta, Drink Coffee, Sub Express, Top Shelf, Northern Grill, Door County Bakery, and Base Camp are still open regularly, in addition to Husby’s and Al Johnson’s.

Zacek said entertainment at the Door Community Auditorium helps provide a better experience, as do the efforts of Husby’s to put on fishing and hunting contests and other parties.

“We appreciate those things a lot, but it would be great to have something a little more regular,” Zacek said.

Despite those businesses continuing to gut out the cold months, Northern Door – and particularly Sister Bay – appears to be feeling the full effect of the waves created by the economic collapse of 2008, not just a winter without snow.

The decline in development and construction work may not, on the surface, seem to impact a fine dining establishment like the Mission. But when those workers want to take their spouses out to dinner, it’s that construction work that pays for it. The tips they leave a bartender at Husby’s or a server at the Sister Bay Bowl allow those servers to frequent another restaurant in town.

“The money makes it everywhere eventually,” Bradley said. “One thing we’ve seen is the decline in holiday parties. Construction and services companies used to take the entire staff to a party, but if they don’t have work, they don’t throw the party.”

A cycle that keeps coming around to an old Door County question: Is it worth bringing visitors up here when everything is closed?

“The Visitor Bureau is working to market the winter, and I get that you have to,” said Sister Bay Advancement Association Coordinator Paige Funkhouser. “But if people come up and nothing’s open they’re going to get a bad impression of Door County.”

Chad Kodanko, Husby’s co-owner, said that ultimately, Door County might just have too much capacity.

“If more restaurants stay open are more people going to come?” he asked. “Definitely not. Several more businesses tried it in recent years and it obviously didn’t work.”

But the question is sure to come up often as Sister Bay creates an economic development brainstorming committee next month to generate ideas for how to turn around the village’s decline.