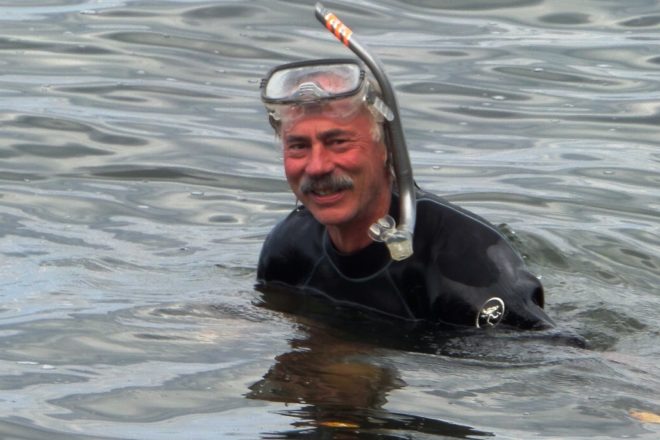 Dean Hoegger, president and executive director of the Clean Water Action Council (CWAC), can easily trace the genesis of his interest in water quality.

“It began as a kid in Green Bay and not being able to be in the water,” he said.

Industrial pollution prevented swimming in the Fox River and pollution forced the city to close the once-popular Bay Beach to swimmers in the 1940s.

“We were told by industry and city officials, ‘Oh, in just a few years the beach will be open and it will all be clean and safe,’” Hoegger said.

Bay Beach remains closed to this day. However, after three years of testing by University of Wisconsin-Oshkosh researchers, the waters of Bay Beach have been declared mostly safe, with an occasional high E. coli count, and the city is considering re-opening the beach.

“As I continued to live in Green Bay as an adult, I found I had to drive to Door County or other areas along the Lake Michigan shore to swim,” Hoegger said.

Eventually he moved to a country home on the water in Little Sturgeon Bay, where he saw algae growth in the water increase from phosphorus pollution.

In 2010, Hoegger retired from a 30-year teaching career, 27 of which was spent teaching 5th grade in Sturgeon Bay. He said it was during his time as a teacher that he began thinking about becoming an activist for water issues.

“I had the opportunity to develop environmental ethics with my students,” he said. “As I became closer to retiring, I knew I wanted to work with an environmental organization. I just didn’t know which one.”

Two years away from retirement, Hoegger joined the board of CWAC. And to prepare himself for a new life as a water activist, Hoegger earned a paralegal degree.

“I thought I would be doing legal research and writing for an environmental organization, possibly for Clean Water Action Council,” he said. “As it turned out, the organization was in greater need of a president and executive director, so my efforts have been spread out. Although the paralegal piece is valuable and is often put to use, my work is more general than that.”

In the beginning, CWAC was focused on point source pollution – or pollution that could be traced to a single source, such as industrial pollution.

“But we had a lot of members coming to us concerned about their rivers, steams, trout creeks and beaches being impacted and largely by agricultural pollution,” Hoegger said.

Agricultural pollution is considered nonpoint source pollution because it is associated with land use rather than an individual source.

“As we started studying the issues and hearing from the scientists about where these problems were originating, the highest percentage of phosphorus was coming from agriculture,” Hoegger said. “There have been great reductions, particularly with phosphorus with point source pollution from municipal and industrial sources. But little has been done to curb agricultural runoff. We’ve seen the problem grow more severe in recent years. The people are concerned, our members and residents, particularly in Door and Kewaunee counties, concerned about the lack of ability to enforce the laws that exist. As a former DNR official says, the DNR is broken.”

In October 2014, CWAC joined five other organizations in petitioning the United States Environmental Protection Agency to exercise its emergency powers under the Safe Drinking Water Act to investigate and address groundwater contamination issues in Kewaunee County.

“Right now we are unable to depend on the governor’s office or the legislature to act in ways that protect the waters of the state,” Hoegger said. “Right now our most immediate hope is for the EPA to step in and actually put requirements on the state and a timeline for the state to be in compliance with the 75 areas of noncompliance they were notified of in 2010-11.”

You would think the EPA petition would have created a sense of urgency, but Hoegger said that was not the case.

“The petition was filed October 2014 and it took the DNR until June 2015 to hold the first meeting with petitioners,” he said. “There was no urgency and all the recommendations are not going to be put in place from the compliance group because they will require administrative rule changes, and the DNR official running the work groups explicitly said it’s not their job to bring those changes to the Legislature. We were dumbfounded by that comment. Well, who is responsible? If you can’t protect the water under current statutes, shouldn’t you be saying to the legislature you should make some changes?”

Hoegger believes there may be more urgency with the Clean Water Act petition filed with the EPA by 16 environmental groups last October.

“Under the Clean Water Act, there may be more urgency there because it’s a statewide petition. With the issue of Flint, Mich., the EPA has been under fire there for their lack of handling it on a timely basis. If the state is told it must make some legislative changes, they’re going to have to act like they do when lobbyists say, ‘Hey, we need this water bill passed,’ and they rush it through. That’s the kind of action they’re going to need to meet the Clean Water Act.”

So what’s the outlook for water quality in Wisconsin?

“I think the environmental groups all across the state have to keep up the pressure. We have to keep it in the public’s eye,” Hoegger said. “Like Crescent Beach in Algoma, people have to say we’re sick and tired of this and we’re not going to take it anymore. When that message starts getting out and new people start running for state offices, it will be clear that point source pollution was controlled, now it’s time for nonpoint pollution. It’s the cost of doing business. It’s not right for one megafarm to pollute the waters that belong to all the other people and not right for them to pass the cost on to all the taxpayers.”