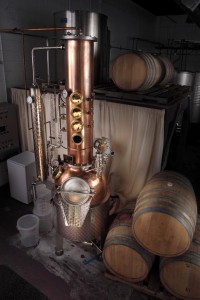 After much anticipation, Death’s Door Spirits, LLC, a Madison-based distilled spirits company, announces their intent to offer a limited “pre-release” of their white whisky.

The white, or un-aged, whisky is being distilled in Madison and is part of a larger program that does include traditional barreling and aging of whisky. It is an unusual style of whisky, known as white, or un-aged, because it has not been aged in wood barrels for an extended amount of time. The plan for rolling out the product, as explained by Brian Ellison, Death’s Door President, is to ship initial orders to Washington Island in time for Saint Patrick’s Day, with distribution to the rest of the state and Illinois the week after. Death’s Door Spirits is reporting that the initial batch will only be 900 bottles of product. “When they are gone, they’re gone.” reports Ellison.

Inspired by the legendary “Death’s Door” waterway between Washington Island and the Door County Peninsula, Death’s Door Spirits are triple-distilled, small-batch vodka, distilled gin and whisky made with care, pride and a special kind of wheat grown only on Washington Island. Created by Chef Leah Caplan of The Washington Hotel, Restaurant & Culinary School, Death’s Door Vodka, Gin and Whisky perfectly complement the flavors of Great Lakes cuisine. The vodka and the whisky highlight the flavor of the sustainably grown wheat and the exceptional bouquet of Death’s Door Gin also features wild juniper berries and Wisconsin botanicals. Other products made with Washington Island wheat include Capital Brewery’s Island Wheat Ale, and Washington Hotel, Restaurant & Culinary School’s breads, muffins and pancake mixes.

More information about Death’s Door, where to find their spirits and original cocktail recipes can be found at http://www.deathsdoorspirits.com.